From Where I Sit

[Note:  I'd written this a few weeks ago and forgotten to publish it, so consider it a letter lost for a while in the mail...]

The heat surge the last weeks feels almost August except for the fan above, cooling me. This porch is the best part of this house these days; it was inevitable that I'd add it on here, as all the houses I've inhabited have had a place like it where, thanks to breezes and shade, you could be in the garden but not among the bugs and heat.

People around here consider the porch a Southern thing, but I think that's a bit provincial.  Growing up, the porch on our first house made a play area in rainy weather out from under our mother's feet.  The front porch at the shore slept men coming in late from work at night (the women and children all crowded into the beds upstairs) and provided a good place to hide with a good book during the day on the swing.  It's still the place to chat, read, write letters, nap, enjoy tea, coffee, wine or a gin and tonic with people who drop in.

When we taught in New Hampshire or visited my parents there on weekends, the porch in either house was the first place I'd take my cup in the mornings, whatever the season.  One memorable dawn, I looked out to a mother bear raiding the garden, while her cubs sat in the patio chairs below me, picking at the pillow ticking, obviously having been told to "be good and sit here now, while I get us breakfast".

At our old home in Washington, the open front porch quickly introduced us to the neighborhood, and the back screened porch became so much an extension of the kitchen that most of the year the door between them stayed wide open as we wandered in and out, to bring the day or the groceries in, do the crossword, plan the next garden shape or escape from a crowded kitchen.  On warm days in December, even, it was a place to retreat from winter.

In quieter moments, I could paint there, the light perfect.  I did one of my best works at that table, a complication of watercolor, wire, screen and beads worked into a folding, falling-open sort of book I called Back Porch Journal.  (Amazingly, the fine art show judge that year actually got what it was...) 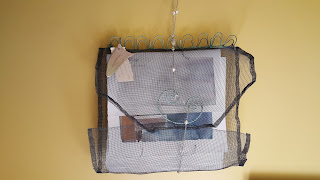 These days, sometimes at the near-end of a walk, I'll park myself on a bench in the arboretum, a kind of porch itself, to contemplate the quiet.

The other morning, likewise, I stopped on campus to sit under the wide porch of one of the buildings, and talked to my aunt on the phone for a while.  There was a huge tree in front of me I couldn't name, but its arches made a kind of canopy over the sidewalk, and it gave me the feeling of facing a high foyer where summer's glare was kept at bay.

You can see all sorts of things from a porch, like looking out a window without frame.  Not only who or what passes by, but interior passages, too.  You can hear yourself think, and that's not a bad thing, especially these days, when (often deliberately) distracting noises from everywhere seem to cloud our brains.  You can hear others...really listen to children, friends, neighbors, passersby, whether you are the intended audience or not. You're not eavesdropping, but you are connecting with the world as it comes and goes.

The word from the porch or the street, the casual remark of a stranger in passing...they're all clues to the reality beneath the reality shows that seem to pass for what is.  Leaving aside the generalities of opinion polls and flash-talk, and listening instead to the personal and highly individual thoughts of people who speak and act as themselves, means that we can adopt the human values we practice one person at a time.  On the porch, they tend to come out in more reflective, considerate, and respondable ways.

We may not like everything we hear or see, but that vantage point, from where we sit, gives us leave to try to understand it and put it in perspective, whether we agree with it or not.  And then we can think about where we really stand.  And why. The three-second (or 10-word) spits we've been encouraged to adopt as communication too often tend to degenerate rational thought into fallacy. Porches slow us down, make us take a wider view of the neighborhood and the world where we belong.

Porches bring us back to calm reason and sense, and to belief.  They return us to ourselves.

These days I am in draft mode...everything I begin to write, except grocery lists, mostly fades off  the page unfinished.  Posts like From Where I Sit and Out of Grandmother's Kitchen lie in wait for reclamation, though from the first they seemed the word of the day--along with probably something else I've meant to say that's left the field now.  I blame the heat, but I think it's something more pressing I can't name.

Meanwhile, searching for inspiration of the tactile sort, I drift over the surfaces in my studio (lately invaded by youngsters seeking their own inspiration), picking over pieces of rusted wire, pink silk thread, mother-of-pearl buttons, copper fragments, and dried paint and glue, also waiting.

In a box at the edge of my work table, which my father had built when we moved into our old house in Washington twenty years ago, I find the watch face and works that my Aunt Sadie had given me a few weeks ago.  She took it from her jewelry drawer, saying, as she prefaces all such heritage, "And what am I going to do with this?"  She means for me to take it, and I do, along with the story of how it comes to be in this box, bare and unhoused for so many years. 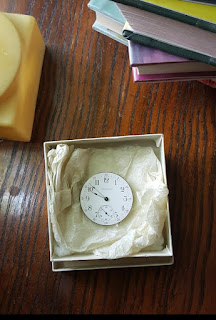 "It was your grandfather's gold pocket watch," she tells me, "but during the Depression they had to sell all their gold..."  She doesn't remember who gave him the watch, or what the occasion, but his early history was so rich with possibilities that it could have been anyone, anywhere, whyever.  He'd traveled a good bit as a young man, seeking with his father homes for their family...Italy to Argentina, finally to New York and Philadelphia where, married by then, he began his own regeneration. For an engineer, as were the men in his family, a watch like this would be an important accessory.  But when the time came, it proved its worth by giving up its gold.

This is the kind of object which turns up often among my aunts' keepsakes, the kind I can never turn down.  This one creates in my mind, almost the instant she hands it to me, the book I will make around it, to make up for the housing it has missed for nearly 90 years. I can practically see it finished, though I haven't even started to gather the materials.  It's a book about time, and what time brings us forward and also back to. 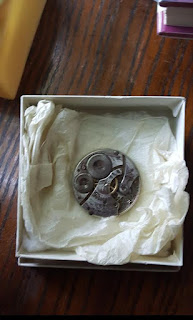 Consider the clues in this time-in-a-box.  My aunt must have barely begun school then, those desperate transactions taking place as far beyond her ken as parental discretion would allow, though even she must have known what it cost to put a meal on the table.  She was the youngest of four children, and sometimes eating meant going down to their cousin Annie's farm, where other relatives gathered to help and to take nourishment in that generous place.  In photographs (I hope I can dig one up...it's around here somewhere), they look happy enough to be pictured among the greens and squashes at the edge of the field.  The stories of oatmeal for dinner and home lost, a good business suddenly curbed and other means invented to earn a bare living...sons having to leave school, daughters taking in piece work at night...they carry on generation by generation, so that, if only in the abstract, we understand what they endured.  And, more important, how the workings of life went on anyway, sans gilt.

So this watch, still its unhoused self in its box, comes to mean all that history and more...it also comes to mean, looking forward, that we are never without the possibility of privation, even in such spoiled-rich times as these.  Food on the table and a house to live in, a useful way of life, are always going to be the primary goals of our lives; everything else we believe we hunger for is needless, easily disposable.  It's ironic that our mechanism for timekeeping is also a reminder that there are timeless struggles--and ways of endurance--living invisibly among us, and it's well not to forget them.
Posted by Rachel's House at 1:22:00 PM 1 comment: