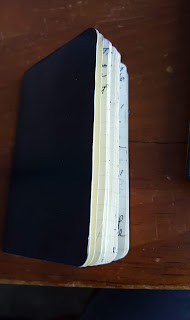 I'd forgotten about this encounter when I wrote about having to leave Spain with a damaged knee last November, but yesterday, cleaning out my travel purse after a mercifully short trip, I found the tiny black notebook I jot things in on the spot to remember for a journal or blog later.

Here is what I found jotted:

A woman on the Lisbon to London flight (she is of Indian origin) comes on board with a big (BIG) red suitcase, a travel bag, and a large cardboard box in a plastic bag that does not quite cover it.  The plane is crowded, and as it is I have barely managed the cross-runway bus, the stairs, the escalator, the long waiting lines, and the wobbly stair up into the plane...I am shocked that she is able to push on with such baggage...that she has been allowed to.

This is my second flight of the morning, and the second repetition of process (my leg about to fall off) as above.  I swear I will never fly TAP again!  Some few of us have been put in a B line (we don't know why) and one man, a Brit, complains to the passport attendant that all the other lines have preference even when people are late...we seem to be invisible here, even though I, for one, have had to pay full price for this change of plans.  He gets no real answer, but the second time he asks, the attendant suddenly looks over and pulls me and my aching, wobbly legs aside and lets me go ahead.  By then, we have been in the line a good 45 minutes.  I'm grateful for the help, such as it is, for lots of people are struggling, not only the woman with the red bags and carton; a woman with a baby, luggage and a toddler isn't noticed (I try to point her out) until nearly at the top of the long stair to the plane.

A woman sends my small suitcase into the hold of the plane...there is at that point no more room for luggage above.  I find my seat, clumping around bemused passengers in the aisle.  As I settle, here comes the woman with the red case and box.  She is standing unable to find a place to put either, when the stewardess pushes past to tell her to give the red case and box to the steward to send to the hold.  The box cannot go into the hold, however, the woman insists, because it has Our Lady of Lourdes in it, and she cannot, absolutely, have it broken by rough hands. She looks at the stewardess and steward and says decidedly, "I will keep it at my feet...it will be safe there."

Though it seems the irony of the moment (I almost laugh, but wisely stop myself), everyone else looks serious, and all watch as the steward/ess glance back and forth at one another, wondering whether to keep to the rules and take it off board or to bend to its religious hold and let it on.  In the silence, this suddenly seems the one moment which focuses the whole absurd day of travel.  In the end, the cardboard box with Our Lady of Lourdes goes to the back of the plane, in a steward's compartment where it will, they promise, be safe, and so, the woman next to me, who has said a prayer holding her husband's hand, says will we.

We are late by three hours now.  I think of the long flight from London to home tomorrow, and in between to tea and sleep and tea again, and hope she is right.