You thought this post would be another ovation to the shore, didn't you? after my week's vacation there, restful and peaceful, walking the boardwalk, feeling the salt water over my feet, visiting with friends and relatives, dawdling each day over books, movies, painting...even managing a row of knitting in the nice front room as the breezes came through. 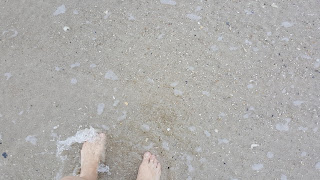 And you would be right...all of that happened, gloriously, and, at the last of my stay, my nephew and new niece's wonderful wedding, when everyone we hadn't seen in a long time danced together on the floor. 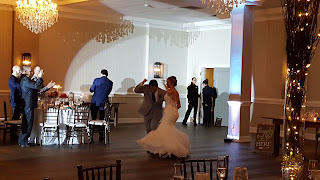 But a few times during our celebrations, calls came from caregivers minding my uncle at home; there was an edge to their reports that I didn't like.  My sister and I made a quick visit to my aunt nearby (I wasn't going to miss that chance) before I headed home.  Well, I mulled as I rode the eight hours, we might need to juggle schedules a bit, see how things go, reorient our thinking about my uncle's care.

Driving up the street toward my house, however, I spotted the fire truck, with ambulance behind, parked at the foot of my driveway. 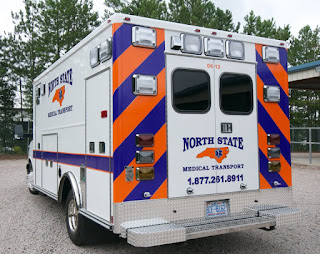 Off to the hospital we went, where tests showed that pretty much everything suspected...stroke?  infection?  pneumonia?...wasn't an issue.  In fact, the cause of his seizure-like symptoms was most likely his dementia heightening and confusion bleeding into his brain.  In the emergency room, he  made a short-term career out of pulling every bandage, needle, and electrode attachment out of his body.  His first night on the geriatric floor he spent parked in front of the nurses' station where there was always someone to watch him.  I found him there the next morning, seated alertly at the low desk at the end of the stations, as if he were meant to be the floor greeter.

Soon new behaviors appeared.  He began to see people, things, situations the others of us couldn't.  He talked all day and night a jumbled streak of memory and immediacy. These dialogues and monologues, by the way, especially the ones weaving his young Glasgow days and perceived present-day problems--"workers" who don't show up for jobs, children who pop up from the floor on staircases we don't have--are actually amazing to listen to and try to decode.  It's a whole different system of meaning, this overlay of time and time, place and place, fascinating. And on some plane it surely makes sense.  If only we could reach the same plane.

The next day he slept and slept.  Calm reigned until we returned home on the third day.  We got easily through lunch and a rest, and then suddenly too much care, too much change, too much company, became too much.   Agitated and angry, furious at his loss of independence, he decided he'd had enough, and announced he was throwing us out of the house.  The biggest indication of his off-balance mind...he wouldn't finish his supper.  This from a man whose appetite rarely fails him.

It was well after midnight when he slept again, a good twelve hours.  When he woke, calm reinstated itself and we had a good afternoon.    Now, day four, so far so good.  As I begin this post, I can hear him wondering when it would be time to go home, and our day caregiver reminding him that he is home.  When he finishes breakfast it will be time to get dressed.  It's a nice day, she adds, so maybe sit on the porch?  Hm, his enigmatic response.  Later on, dressed and more energetic, he will voice the need to go out, to do something, and so we send him for a haircut, and he comes back looking his dapper self.  But he falls asleep immediately on returning.  A haircut can be exhausting.

The interesting thing about these mental revolutions and their attendant physical changes is not so much what they are--although some of them could take prizes for invention and drama--but the way others react to them.  Most of the caregivers take them in stride (some more stridently than others).  Each personality instates itself into the matter at hand...some take past experience and impose it on the present; others try to out-strategize him; still others decide just to let things take their course.  Some use words like non-compliant; some try to reason with his oddities; others smile his miscommunications off.   Everyone from physicians to passersby freely offers advice on the rigors of dementia, often contradictory advice, always absolutely stated.  I am learning not to frown so much at the barrage of good intentions, but simply listen and nod and keep my own counsel.  It's a learning experience, as one says when one means several other unprintable phrases. 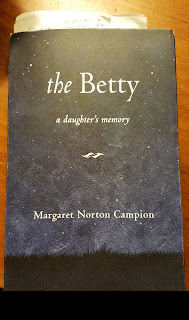 The absolute best, and superbly timed, guidance, however, has been a gift from my friend Margy Campion, who out of the blue sent me her beautifully written book, the Betty, a description of the journey of an elderly mind at this time of life and of the strange way that we who are not as far on that path must watch by their side.  One after another, in her sweet, generous, but honest recounting of her mother's life, come anecdotes that parallel my uncle's passages.  And responses that parallel mine as well.  With her two- or three-year advantage, she allows me to see what may come to pass, both the rewards of experience and the grindings of frustration. What is possible to help, what will undo itself despite your best efforts.  Though she published her elegantly designed book only privately, I hope it will come into the public domain before long.  There are at least a dozen people I know who would, like me, be grateful for its real insights. 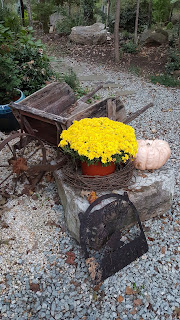 Meanwhile, the very good thing is that Fall is here, and we are full into its doings...mums in the yard, pumpkins to decorate, crisp air to walk in, children counting the days until Hallowe'en. I find some good help cleaning up leaves and branches left by the latest hurricane in my absence, the best of all being Alexander and his mother whom I found the other day raking and piling, sweeping and picking up while I was off to get the car serviced.  Alexander is a good worker, and, as you can see, an avid list-checker. 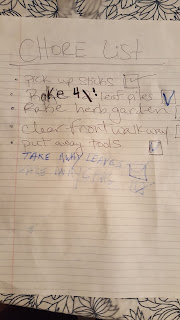 And there is always the memory of tranquility, the one sunrise I could catch, the sound day and night of the waves like a heartbeat, the place where I capture myself again.  Another gift so timely, so perfectly attuned. 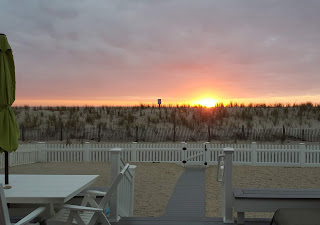 Wide open to a ripening sky, or hidden behind a cover of clouds, the sun always rises.