This morning, damp and gray after nearly a week of beautiful skies and breezes...a little hot the last two days maybe but still drawing me outside as much as I could...it seemed like a good time to stay in bed with a good book. Sleep has been broken these past nights...why I can't figure out; some reel of odd worries that certainly one can't deal with at two a.m. keeps playing and the button to shut them off remains elusive. 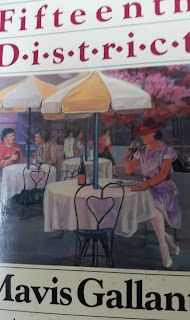 At the sound of others waking up in the house above, I picked up Mavis Gallant's From the Fifteenth District, a collection of short stories I'd owned since at least the 'eighties.  The night before, I'd finished Pagnol's My Father's Glory, a charming remembrance of his childhood in the south of France, but didn't feel like starting the nonetheless anticipated pleasure of his second half, My Mother's Castle, so soon.  So a hand to the bookshelf brought out the Gallant, also about that part of Europe but in the hard period during and after the war.  The contrast between the two couldn't be sharper, but the French film maker Pagnol's views are so artfully witty, that the interior tensions of the Canadian expatriate Gallant's were their own draw. 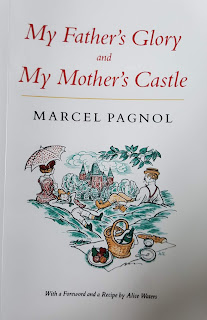 This is all the review of them I'm going to get into, I promise.  I'm just saying that I am in the mood these days to spend a lot of time imagining life, for better or worse, in the south of Europe with large dollops of Paris on the side.  (My read before Pagnol has been The Paris Hours, a novel by Alex George,  that filled that criterion topically if not as satisfying.)  If the world weren't so closed off, I'd probably get on a plane and head there now. 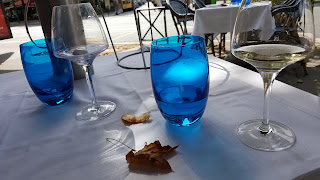 I wonder why, this minute, I feel that pull.  There are so many unknown places I have yet to explore. Certainement, I have loved my small trips to Paris and to Aix, to the Luberon and the southern coast, mais oui, absolument.  Watching a film last night, which happened to be subtitled in French, I found myself reading those phrases more than hearing the English...it startled me how that language was suddenly gelling after my years of clumsy trial.

I guess that in these days of at least partial isolation the pleasure of those freeing journeys outside oneself rise up not so much out of memory but out of sensual instinct.  You can hardly blame me for my wanderings that recall what my spirit seems to need right now.  That lovely painted cover of Gallant's book has me placing myself in it, the broad-brimmed-hatted woman at the cafe table, a wine in hand, waiting for nothing in particular. (I could, in fact, be outside on the terrace here among the roses with a glass of wine, my pink hat on the table, waiting for nothing in particular, but I am guessing it would be second best.) 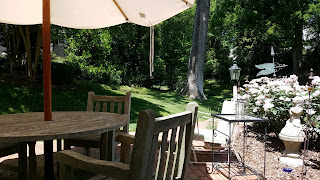 Back in reality, there is still a lot of pleasure in this lovely small place...a kind of substitute, it occurred to me the other day, for that wonderful Aix Airbnb Mary Ellen and I stayed in last summer...
remember? 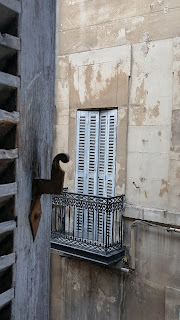 Also, I've been wandering over to put my hand to helping Joseph with his rock walls and terraces at the house.  (They remind me a lot of the Luberon.) 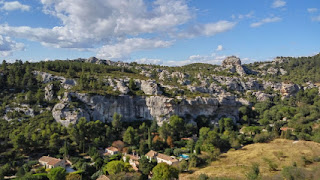 I'm not, I'm sorry to say, any use digging, discovering, rolling and placing boulders, but give me a plant to insert or leaves and ivy to remove or weeds to pull or branches to cut up for the dump, and there I am.  Poking around in the garden is one thing I have missed since I've taken up apartment life, so it's nice to have that chance to cultivate earth only a few blocks hence. And also to be a small part of the evolution of that nondescript front slope into something more definite than I could have imagined, though goodness knows I tried to while I lived there. 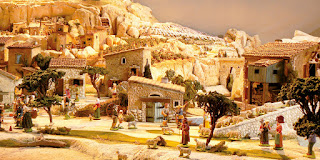 There's that word again:  so much of life nowadays seems lived at once in immediate need (for health, for safety, for supplies, for closeness) and in the imagination.

Reading, for me at least, takes on its own necessity.  This time it's not so much a good plot or interesting characters or fine language;  it's the sense of a certain place, one I could recognize in a stretch of recollection (to borrow from Wordsworth), or of wish, an other-world that I seek (and no, I don't mean alien life on Mars).  I want to travel again to the certain pleasure those former places retain for me. 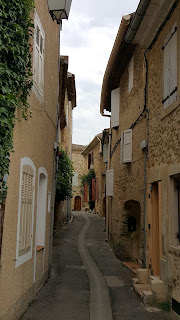 What a difference from last year, when my imagined itinerary insisted on places I hadn't been before, places that would widen my knowing the world, footfall by footfall exploring.  The world still shrinks more and more, even when we can't get to it, but somehow it is the sense of, and the memory of, travel that I want to find between those pages these days. 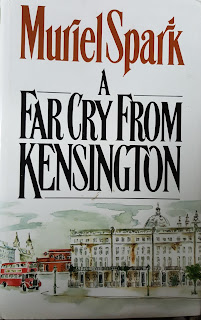 Reading has after all been, since I was a child and first learned the power of placement words evoked, a kind of traveling out from wherever I was.  I could get lost somewhere and still come out again.  I could be someone, somewhere else if I wasn't easy with who or where I was.  (It's the same story a lot of readers would tell.) Here again, in a closed up world, I'm traveling through pages by necessity.  Or call it yearning, if you wish...you wouldn't be far off.

Hunger, or The Art of Living 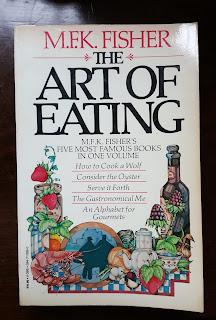 It seems to me that our three basic needs, for food and security and love, are so mixed and mingled and entwined that we cannot straightly think of one without the others. So it happens that when I write of hunger, I am really writing about love and the hunger for it, and warmth and the love of it and the hunger for it … and then the warmth and richness and fine reality of hunger satisfied … and it is all one.
—M. F. K. Fisher, The Art of Eating

As you can see, I've been delving into old favorites for reading these days.  Unpacking books a few weeks ago, I recovered ones my eyes once glazed over, so long have they been on the shelf.

Mary Frances Kennedy Fisher's fine essays and stories always center around food, but they aren't only about what we eat.  Whether we eat to live, or live to eat, nourishment means so much more than food, she illustrates. It's a lesson that these last few months have made us learn, as we re-evaluate everything of worth...what and who we live for, what sustains us, and also the world, essentially. 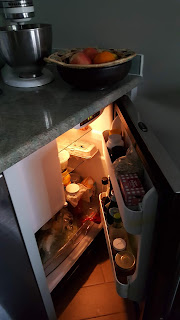 My friend Katharine, in her early nineties now, isn't, thankfully, without daily help to shop, do errands, clean around the house, but somehow even she, a woman who, I have always known, eats to live rather than the opposite, seems to see the certainty of dinner as the polestar of her day.  "I get up every morning," she told me on the phone from San Antonio, "pull myself together, and first thing go down to the kitchen to see whether there is anything for supper."

My mother, still at the breakfast table, used to ask whoever was in hearing, "Now what are we having for dinner?"  Sometimes we'd blink our eyes, bemused at that question so early in the day.  But since no one could accuse anyone among our family and friends of eating only to live, food for the day naturally seemed her organizing principle, too.  And no wonder, considering the uncertainty of number and tastes she would be feeding.  Anyone could, and did, drop in.  She and her generation grew up in the Great Depression, when a kind cousin had a farm and would share their produce; still, some days they ate oatmeal for supper, she would tell us.  (I wonder whether they complained?) 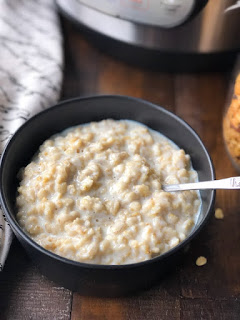 Though we are no longer in  quite so dire a depression, my cousin Barbara mentioned the other morning that she'd made baked oatmeal for breakfast, because the Cheerios box was empty, and she wasn't about to risk the supermarket just for that.  The grocery, even the smaller markets, are places we go now only at getting-to-dire need, first dressing in hats, gloves, and masks.  Some of us can order ahead for delivery; for that, however, you have to keep your fingers crossed that you have charted your needs correctly for the next few weeks.

For those of us brought up to cook and serve whatever is on hand, being out of one's usual cereal isn't a big deal (and surely, baked oatmeal is no mean substitute, even for dinner).  We know how to make do, as our mothers and grandmothers, ad infinitas, did.  It's especially useful for the ad hoc way we need to live our lives these days to remain healthy and productive.  But Barbara's mother, our Aunt Sadie, is staying with her now, plucked out of her locked-down senior apartment before the Covid-19 virus could reach her from down the hall.  So she has an even greater reason both safety and nutrition concern her.

As it happened, the same morning found me wondering (in a turning-into-my-mother moment) what we could have for supper...lemon risotto, shrimp, meatballs for Alexander who doesn't do shrimp, avocado and ? ? salad...  But like Barbara, I'd be working with what was already on hand. That risotto, the thought of which actually began in an email from David Lebovitz, his Citrus recipe using grapefruit and lime, had to be adapted to the lemons I had instead.  (It turns out that Lebovitz had to adapt his citrus ingredients, too, so we're square.) 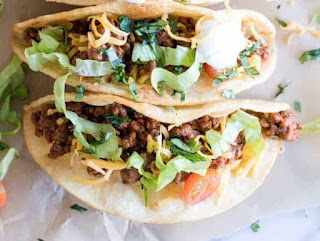 Plans, of course, change (another thing our mothers knew).  Joseph, coming in the door, reminded me that it was Cinco de Mayo, so he thought we ought instead to have...tacos!  Fortunately, he had the major ingredients at hand, since I somehow missed a chance to order this week from Goodness Cooks, two young women who make wonderful fresh, local, organic foods and had a perfect menu for the day. 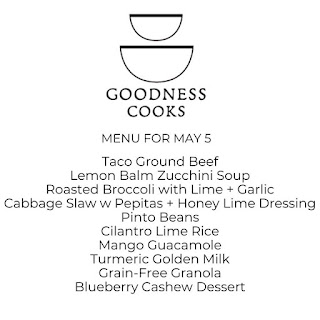 Alexander whipped up a batch of pina coladas (sin rum) to toast with...he knew the recipe.  We cut out flags.  The risotto will wait for another hunger.  That's life, too, as Mrs. Fisher means it...the fine reality of hunger satisfied, injected by more than necessity, that siren song of celebration or season.

But what happens when even the mother of invention can't come through?  When not only Cheerios, but the stuff of any meal at all is missing?  Then both nourishment and the spirit fade.  And lots of other things, like a family's health, the ability to keep a job, to keep children able to learn, and a roof overhead, a safe home.   Hunger is at the root of so many things we take for granted.  But it's not something confined only to our kitchens.

I am thinking that the prime intimation of Mrs. Fisher's quote is that we need continually to find ways to help nourish the community around us who are in more need than we, while we keep ourselves and them safe, too. Security matters. Health matters. Care for others matters. Sharing, as much as self-preservation, matters, because it is self-preservation, especially when the usual isn't the usual any more.  That ought to be something born or bred into us.  It's difficult to see, as we look at and listen to the sometimes petty, often selfish, and too often xenophobic complaints about the way we need to live these days, why it's not. 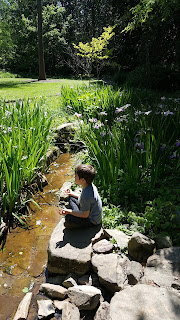