This week fall weather has finally blown in to convince us it is really October.  Witness not only the change in temperature but the quality of air...the early morning sky closing in, hinting of November skies to come.

It came overnight last weekend when, after a long spate of hot, dry weather, a cold front found us putting on sweaters the next morning.  No one was complaining, though we are still yearning for rain.  This months-long drought has left no margin for fall color; plants droop, trees shed already crumpled, dry leavings.  I lost my best hydrangea to it at the house, I discovered yesterday, though strangely the gardenia next to the front door is almost supernaturally lush green.

On my morning walks, I think of what survives drought...of earth, of body, of mind.  Time, I have always contended, is my nemesis; that figures into these contemplations, as well.  Fall already, a year three-quarters to the finish.  As am I.

Since in a few weeks, I will be leaving for another journey, I've been reading A Walk through Wales, by Anthony Bailey, to ready myself for my first visit to that country.  As Bailey's walk north from Cardiff to Bangor is tinged by a bit of geographical as well as observational narrowness, I am keeping an open mind (though still appreciating his point about the complexity of a country within a country dealing with  political offhandedness from its overlord). 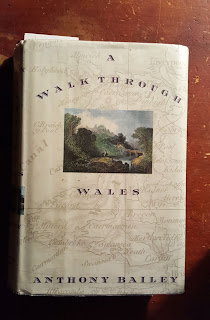 As the chapters I read last night were beginning to close my eyes, I turned a page to a curious passage:

Do mountain climbers find summits anti-climatic?  I suspect that the ascent and descent matter most and in retrospect form an all-inclusive experience in which the period at the summit figures only as a necessary way-station:  a point you have to pass on the journey between going up and going down.

Reading that, I forgot momentarily that he was referring to his climb up Snowdon, and envisioned one's peaks in life.  When we get to a place we believe is the apex of our intentions and dreams, does it really end up mattering as much as the road we took to it or the fulfillments which follow because we have been there? Or matter as much as the anticipation or the memory?  Perhaps there is really no summit at all, except in our imaginations, which drive us to believe we have reached somewhere important.

Although, for a few moments we stop and admire the view, breathe in the rarefied air, smile broadly at our "achievement", still, looking back to it, wasn't it simply just a point in a long story that is still not concluded?   I think, myself, that it matters more what happens since that point because we were there; just as it matters what happened or what we were that brought us to it.  And what if the summit we think we have reached isn't the summit at all?

For a dedicated achiever, it's not an easy concept to accept, I imagine.  But there are so many peaks and valleys in a day...in an hour, for that matter...perhaps there is as good a reason to celebrate the rarity of an unaccoladed one, whose magnificent view is not outward, but inward.

Peace to you this day. 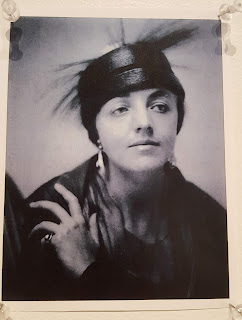 It seems that wherever I find myself, there are artists nearby whose interesting stories I relish discovering.  Below me on the first floor of this apartment building lives Barbara Rhoades, a retired art teacher whom I met out by the community gardens one day not long after I'd moved in.  I had already noticed the license plate on her car, Artcart, a first clue.  It was only after a few conversations with her, however, that she mentioned that she was arranging an exhibit of paintings by her great-aunt, Katharine Nash Rhoades,  whose work had been "lost" for a while. and now, found, was on its way to the Art West exhibit hall at Elon University for a long-overdue renaissance. 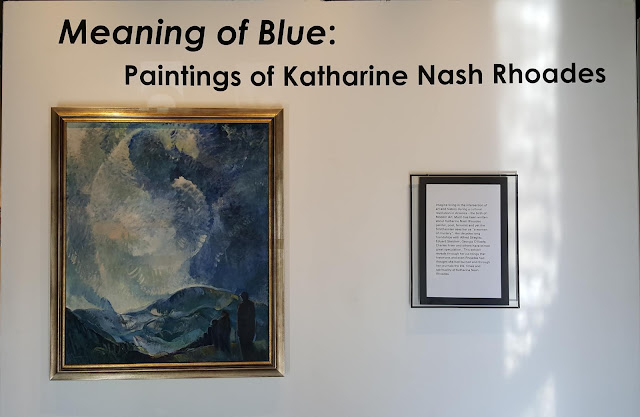 It's an interesting story, best told by simply showing you the photos I took, for Barbara had done a wonderful job of displaying not only her great-aunt's art, but her letters, journals, and some discovered history, personal and artist. [I apologize for the poor quality of these photos...lighting in the university gallery was not really professional quality, and for some reason the angle of my lens crooked itself.  But I think it is still worth showing them here, because where else would you see them now?] 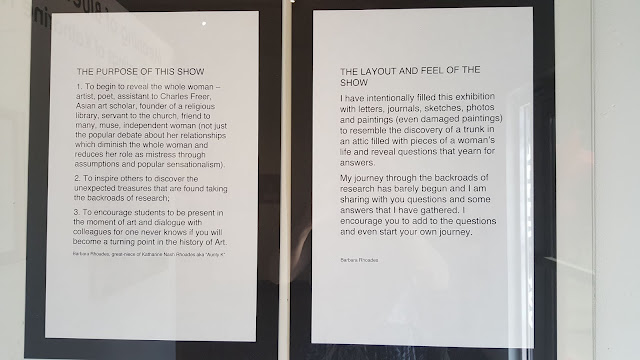 There were also a significant number of photographs taken of her throughout her life, particularly in the era in which she was a correspondent and model to Alfred Stieglitz and Edward Steichen, two of the U.S.'s most influential photographers of the early twentieth century, who put her portraits on display at exhibits, art journals and books.  In fact, Barbara has related, a photo whose model was attributed to another woman by the archivists at the Yale University collection is instead one of Katharine. 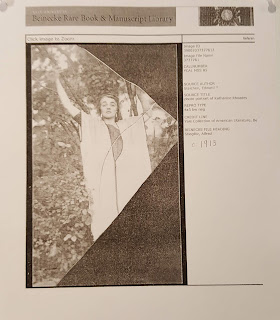 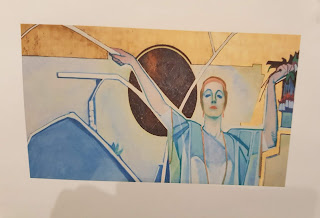 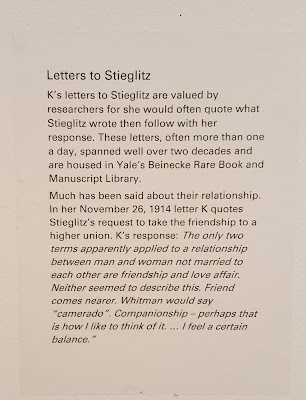 Katharine, I was particularly interested to learn, was also one of Duncan Phillips' "three graces", helping him make connections to some of the best artists of those years, which became what is now the Phillips Collection,  off Dupont Circle, one of my favorite museums to visit. 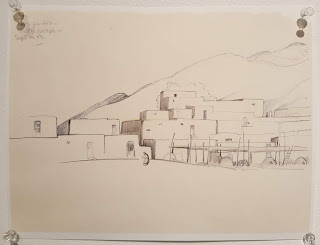 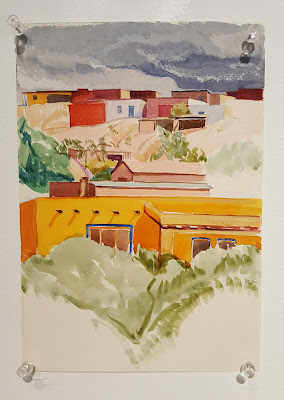 There is work of Katharine's in the Phillips Collection, too, and on the wall of houses in New York, as she also worked as a muralist. 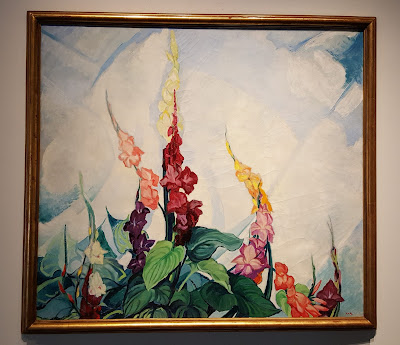 How is it, more than just I ask, that women's art doesn't make it to the historical public eye, even when they are clearly part of, supportive of (maybe that's the problem?), and working in their own right next to the men whose names and work fill the pages of art books and museums the world over?  Tonight, as if to make my point, Antiques Roadshow featured the art of a woman whose daughter brought her work to light by bringing two paintings and asking about them.  They were clearly excellent examples of two major styles of the '30's.  Any museum ought to be proud to own them, any art class intent on studying them. 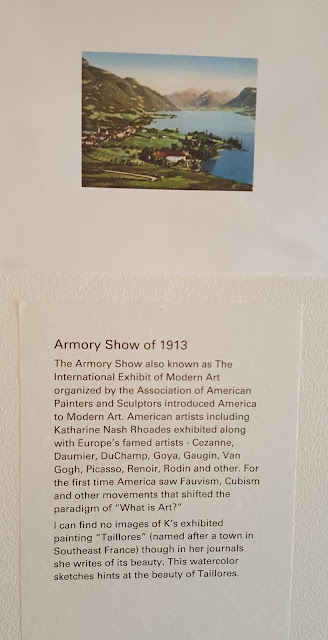 Although she was part of the famed Armory Show in 1913, Katharine's work almost disappeared from not only public view, but even private, piled-in-the-closet view.  I will let Barbara's history explain here, and then let you readers weigh in on the issues which that part of the story brings up. 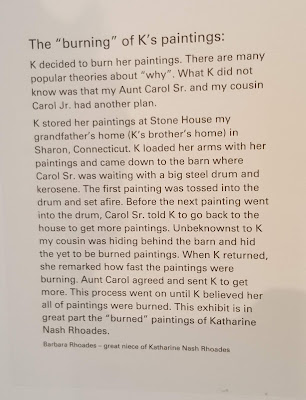 Meanwhile, because I was out of the country for most of the time that the exhibit ran at Art West, I managed to get to see it only in its last week, days before Barbara, who will be moving to Arizona in a few weeks, took it down to ship to herself and family members.  I wish I had had enough time to bring others with me, another way, if only small, to further her.  Fortunately, however, several museum and documenters of the work of that era came to take notes and correct errors.  Barbara's determination to fill in an important history made the difference between anonymity and recognition for Katharine Rhoades. 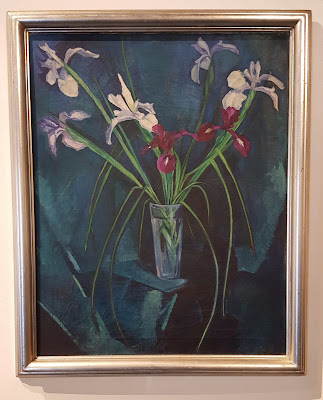 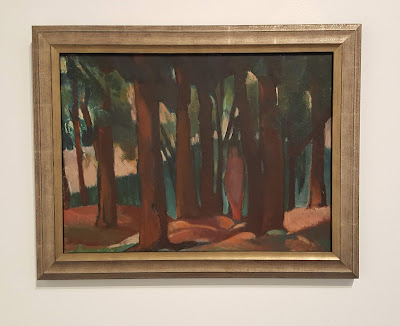 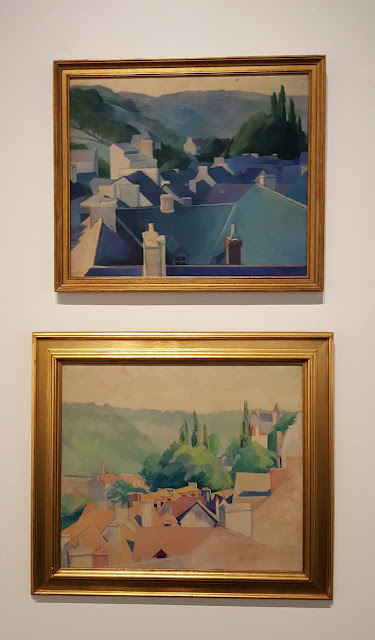 Here's to you, Katharine Rhoades, and to all those "lost" artists whose sensibilities we are unfortunately missing from art history. 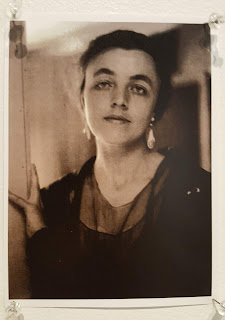