One of Those Days

In the film The Best Marigold Hotel, one of the characters, a high court judge in London, drags himself along to a retirement party for a colleague.  One day soon he will be next, he grumps to a fellow judge, who reminds him that he's heard that before.  But no sooner does he enter the room than a shock to the heart overtakes him, and he backs away through the crowd.  "This is the day," he announces to the crowd at large.  "This is the day."

This is the day for me, as well...not to retire (supposedly I did that a decade ago) but to get on with a journey I have been, like the judge, threatening (here read hoping) to make for some time.  Sometimes it doesn't even take a TIA to know when the time comes. 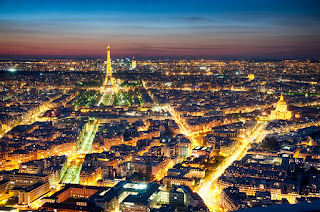 So, I thought a few weeks ago, it's time I went to Paris.  Really time.  I wondered what I'd been waiting for, though the answer came quickly enough.  But a look at the calendar and a bit of foresight into the future told me that what is usually a scarce commodity around here...time...had broken open its tightly held trove and offered me a gift.  I grabbed it, running to make a plane reservation, then a week later, more pensively, to find a place to stay.  Friends in London, when I told them, signed on for part of my journey, so I will be stopping there on the way so that we can take the Eurostar together to the City of Light.

Mon vieil ami d'ecole, Will and, we are hoping, Dorothy will spend a few days visiting friends there and, if I know (and trust) Will, walking me around the city recounting les histoires des toutes des pierres dans les boulevards and les rues.  Having spent a goodly number of years taking students on the best European tours of their lives (he's known as a legend in the trade of studies abroad), he has learned a thing or two about le terrain, but, more important, he remembers everything.  His mind, like that of his old mentor (whom I fortunately later married), un professeur extraordinaire, is a veritable trap of data, history, and tales with a fine sense of life and humor. 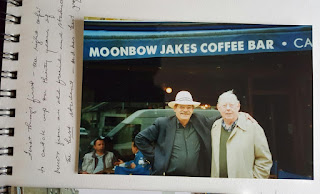 I still remember our trip through London nine years ago, especially along the Thames in Southwark, Shakespeare's old haunts. Then I was traveling with both of them, trailing along while they traded dissertations on everything from Renaissance theater to the Clink and its attendant streetwalkers. 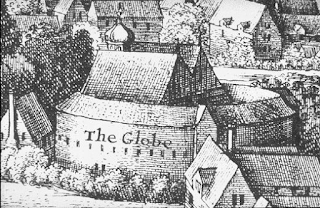 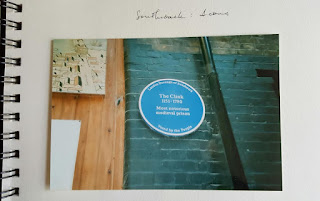 For many reasons, seeing Paris first with Will along for the ride makes me smile just thinking of l'aventure a venir.

[Pardonnez moi, all you French majors and maitres:  I can't figure out how to make cedillas and accents, neither grave nor acute, not to mention carets, on this site...but s'il vous plait, just assume there is a chance I know they should be there...like that one in plait...] 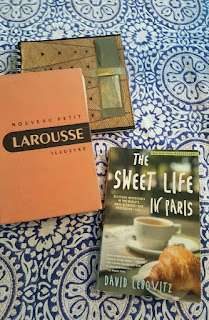 Which aside brings me to the time spent since I made that last reservation...learning, encore, all the French I have forgotten since school.  I know...it's pretty much a cliche', dredging up high school language lessons from fifty years ago.  I won't know how I've done til I get there, of course, but so far so good.  As long as I am speaking or reading simple subjects and verbs, I'm sure I'll be fine.  But the French films I've been watching nearly every night, just so I can listen to la langue real, have taught me another lesson.  Aside from picking up the occasional idiom, when I shut off the subtitles I'm able to recognize only a word or two every sentence or two.  Quel dommage. 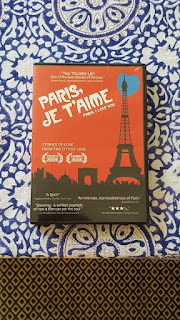 Fortunately, there are great contemporary books about all sorts of aspects of Paris, all of which I have been absorbing like a sponge. Along with the requisite guide book, I think I will tuck David Lebowitz's The Sweet Life in Paris and Adam Gopnik's Paris to the Moon in my travel bag to relive once my feet are on their ground.

At this moment, more interesting than French grammar, there are fifty or more robins in my ailanthus bushes, a female cardinal among them.  They're fluttering wildly through the neighbors' ailanthus, too, feasting on the berries with which for a short time spring decorates those otherwise unremarkable plantings.  Ailanthus are way too prolific here, because they'll grow whether you care for them or not, and so everyone's predecessor put them in among the trees and rocks to fill in, knowing they keep their leaves all year whatever the weather. 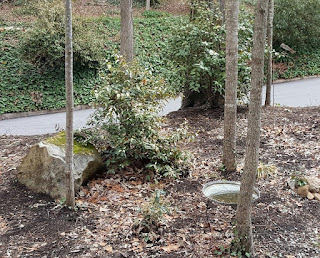 For that reason they're a lesson in the reliability of sturdiness over the all too short summer's lease, and fill the yard with wandering tendrils (growing as long as you will allow them to lengthen) when all else fails.  But like me the robins are taking advantage of the moment and have set themselves to pick clean the red pearls that are the ailanthus' fleeting glory.  I can't blame them,  We are in the tail of the great northeastern storm that is bringing our temperatures into the twenties tonight, despite the fact that we have had weeks of sixty and seventy degrees, spoiling us for spring.  Fortunately it's only some spurts of high winds, helping to prune the dead branches from the trees and giving the sun a little run for its money.  We dig our scarves and gloves out of storage and carry on.

Besides, there's Paris to look forward to.

This weekend (March 17-18), the 7th Pamlico Writers Conference opens in Washington, North Carolina.  On the program Saturday afternoon will be my session on Journals as the Ultimate Sourcebook for writers. Both my workshop and the whole conference are open to anyone interested in writing or writers of any level. Join us if you can.  You can enroll at the door, or on their website.  For more information, go to https://pamlicowritersgroup.wildapricot.org/event-2260134.