My aunt eats slowly, her morning spoon pushing squares of cereal and rounds of banana around the bowl until she captures one--though which one she won't know until it reaches her tongue.  Her slowness is a matter of habit, certainly not lack of interest nor even her 98 years (she's always been the last one finished at table); her appetite is as keen as ever, though she eats, I notice, a speck less every few days.

For me, sitting across our grandmother's table from her, it seems that each bite must be a surprise, though she takes it in unflappable stride.  She expects oat squares and bananas; therefore they come, albeit in their own time, until she is finished the bowl. At lunch, for which we have dinner, she is a bit more questioning:  "Where is the meat?  Is my wine here?  A piece of bread, please."  The last of which she uses as a "pusher" to help along the small, miscellaneous hills of food she has gathered from across the plate, fork from the right, knife from the left.  The last bite on the plate is the most challenging, but with an extra hand she achieves that, too.

Eating blind is an exercise in traversing the unknown, as most of her doings are these days.  A stalwart defender of her independence, she can still admit her incapacity and yet demand her rights to have what she needs and wants.  Everything in its place is our goal for her ease, and yet that, too, has its adventures.  A coffee cup returned after a sip to the slope of the saucer, the cut halves of toast (buttered as she likes, thickly and right to the corners) slid hither and yon on the plate.  Ice cream (one of her favorite desserts) seems to have little trouble gathering into the spoon, but carrot cake, even without the raisins which she dislikes, scatters across the plate like frozen sand on a winter beach.

As slowly as she dines, so she walks, tentative, halting steps, though with purpose.  She has mastered the light switches that only vaguely assist direction, the furniture that serves as her guideposts along the paths from bedroom to kitchen, from den to porch.  Only in the last few weeks has she begun to lose her way in our small house; even a small missed turn will send her to the kitchen instead of the den; to the den instead of the bedroom (the dining room, the center of it all, is not usually missable), and the surprise at not being where she aimed.  And yet, nothing diminishes the ambition to arrive where she intends.  "George!" she calls to my uncle in a voice as unblunted as a general's on review, "Where are you?"  And then, with the response, her direction reinstates itself.

Even for her, blindness can be quickly tiring.  The row of stitches she painstakingly knits, counting carefully at the end to be sure she hasn't dropped or added, can be all she accomplishes in half an hour's sitting, her hands directing the circular needles she prefers.  Even with the day lamp over her left shoulder, positioned to help the most, a single row is an achievement.  Every day she picks it up, determined to make the 33 inches the strip should be for its inclusion in one of the lap robes my sister always has in process.  And every day she rues her failing (mostly failed now) sight. "Don't get old!" she admonishes anyone in hearing range.  After the row, it isn't long until her head falls forward, slowly, the sun warming her nap from behind.

The same occurs with reading her large-print book, one or two sentences at time.  She doesn't give up either her interest in it or her attempts to garner the clues to the mystery, but after a page, she rests.

This morning, rising earlier than usual, she gets herself weighed and into slippers and robe, and calls the rest of us to organize breakfast, on which she dines heartily.  Then, though it hadn't been her habit until lately, tiredness descends and she announces that she'll go back to bed for a while.  After an hour or so, I don't hear her at her ablutions yet, so I will peek in to see whether she's still relaxing.  Though she will berate me later for letting her stay in bed so long, I will counter by telling her that it's Saturday, and there are no appointments, no company coming, nothing ahead but relaxation and perhaps a walk in the sun when it warms up a bit.  She can, I will assure her, take it easy for the morning.  After a life ordering and doing and managing, managing far beyond, and far more fervently than what most people would give in to, she's certainly entitled to that.

My sister asked me the other day, "What do you think we will be like when we're that age?"  A few years ago, I'd have laughed and answered ironically:  Just like them!  Thinking of my mother, aunts, uncles, all of whom attained their nineties, minds intact if bodies tended to betray them, annoyingly.  Each trying as hard as her/his personality dictated to stay the course of time.

Now I don't quite take that resilience, determination, fortitude...not to mention the quick spurts of good humor...for granted.  I would be lucky to be that healthy of spirit and drive if the next quarter century finds me still on this earth.  Every day, watching my aunt (and uncle, too) is another lesson in how best to get old...if not always with the painless vision we imagine when we say we admire those who are "growing old gracefully".  It isn't a sweet, indulgent capitulation to age that seems to matter, or that is even possible.

Instead, we ought, I will tell my sister next, be practicing for speaking our minds as loudly as we can, and demanding, as she does, that life go on as usual.
Posted by Rachel's House at 7:53:00 PM 4 comments: 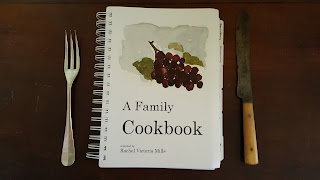 Yesterday, I bemoaned to Cathy the fact that it's been a month since I last wrote on this blog, being not without inspiration, but without the focus to turn words to page.  As is her wont, she came back immediately with her idea of a solution: "Just write one paragraph."  Right, I thought.  The paragraph and I travel the way of Faulkner's sentences:  I am certainly capable of it; I just don't feel the need to stop at the end of every rational point...everything in life is connected, after all.

Since my aunt died, though, late on November 4th, writing anything but the form-filling has been nil, save for her obituary. Such traumas close me up to all but practical thought; I go into mindless action, doing what tasks need to be done, organizing and re-organizing, making the changes necessary in a fast-changing life.  Wearing myself down to no words at all.

But Cathy can probably be credited for opening my word-door again.  Early this morning, a vision came to me of the family cookbook we produced twenty-some years ago, and suddenly I knew how to begin here.

With Thanksgiving coming fast on the heels of Aunt Vi's passing, the holiday season, with its tumble of family and feasts and frantic activity, ought to be an intrusion into sorrow; it's said that holidays are often hardest on those who have suffered loss.  In past years, closed tightly up into myself after two searingly close deaths, how fearful I was of attending to such social occasions...how I girded myself up against anything but the necessary.  But this time, having a table to fill with children, relatives, relatives of relatives, and friends and their relatives, silvery service on shiny linen, wine, and food cooking for days, each redolent of the history we have shared, seemed to me just a continuation of her memorial, another way to honor memory.  After all, our gatherings resemble in no small way how my aunt not that long ago filled her house, as did my mother and grandmother theirs. They were open to any guest; the tables expanded or multiplied, however small the space.  (My father once remarked, after inspecting our first house, "I like the way they spaced those roof joists, but that dining room is way too small.")

My sister Ann, on such occasions, reminds us tongue in cheek that food is what our family is about, in sorrow as in joy, in celebration as in vanquishment.  Often one affection glides along with the other; someone lost brings back someone gained...we mourn a death, we look forward to a new life coming into the world, or a lost one returned.  We gather around the table to share one and both simultaneously.  We're not unusual in that.  In the short weeks between her passing and Thanksgiving, neighbors from houses nearby, bless them, brought daily offerings of sustenance to our door.  Food as nourishment and compassion is hardly a new thing in any culture (though my Scottish uncle, quite amazed and touched by their care, asked, "Is this a Southern practice?").  Food is the language we all have in common.

As in times before, the table held old dishes and new dishes, each remembered by its maker or its originator.  Our book of recipes...my mother's and grandmothers', my aunts' and sisters' and cousins', my sons' and husband's and friends'...might as well be instructions for a renewable feast that acknowledges both life and loss.

I don't mean to say that the holiday table is a panacea for grief.  Hardly.  You could make a case for temporary distraction, for the busy-ness taking one's mind off absence and heartache for a few hours.  But not a good case.  My uncle, the newness of whose days without my aunt brings complication unimaginable, generously let himself become part of the scene, teasing children, listening hard to and trying to attend the conversations around him.  My friend Johanna, also recently widowed, who had asked to join us for the Thanksgiving weekend, too entered willingly enough the crowd and noise of the table (the children running around and under it), seemingly relieved by the occasion on which she could feel loss and beyond-loss.  It's not always easy to rise to the surface from the cloudy underwater of mourning.  But it can feel like a breath of new air, an intimation that we can eventually come back to live with ourselves again.

This isn't what I set out to say, actually, when, between dreams early this morning, I imagined that photo, and by now I've forgotten just what it was I did intend.  (Perhaps I could have written that in a paragraph.)

But sitting here, in the small interim between one feast and the next holiday racing (for better or worse) toward us, I find words not about what we have lost, but what continues, and what that continuation means to our solace.
Posted by Rachel's House at 7:41:00 PM 3 comments: