One thing after another...

Good morning, though it's nearly the end of it, and I'm just getting started with my upstairs life, which includes art in my small, rather crowded studio (which can at a moment's notice also be a guest room), and this blog on my more spacious but equally crowded desk at the other end of the hall. 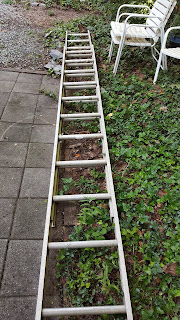 Right now I am listening to my house being power-washed, a service my kind neighbor arranged for me, and if ever there were an analogy for the power-washing our psyches get when crises strip us of all our built-up, and often moldy, defenses, here it is.  This is what attempts at clean living will do to you. 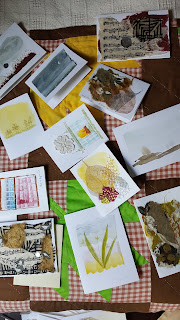 Going in to the studio this morning, I found water leaking through the windowsill, just missing by inches the new cards I had laid out, this week's work.  Going out to warn the worker away from windowsills and doors, I saw that the woodwork outside the kitchen door, where he had forcefully cleaned, would be in need of paint.  The shed, too, once encrusted with green moss, would obviously  need, besides trim paint, some new boards above and below the double doors. 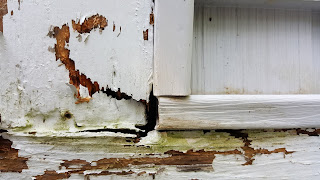 I sigh.  Just when you think you have things in hand, the next task drags behind it a whole string of new jobs, some unexpected, some hidden by denial, that clink in your brain like those noisy cans attached to wedding getaway cars.  Instead of Congratulations! the dangling sign reads Repair alert! 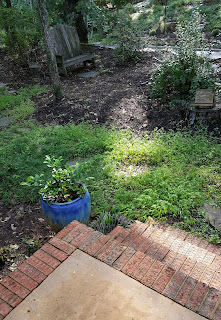 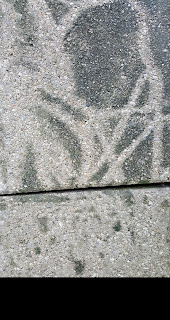 Not that some of the cleaned-off world doesn't suggest the good side...art to emulate, patterns to meditate on, a new view that brings a smaller, but more contented sigh.

Still, you reach for your list of odd-jobbers, carpenters, painters, and add those newly uncovered tasks to the already long list of Things That Must Be Fixed.  Like the water discovered yesterday, after weeks of very hard rains, pooling under the house.  Like the dishwasher, which now won't work well with the recent sink re- (and re-) plumbing (admittedly not a big deal:  I hardly use it anyway).  Like the cat (not mine) or perhaps a raccoon or a nest of squirrels or some other house-devil hiding under the porch, making a smelly nest where I can't reach.  "Just get a roll of that screening from Lowe's and wire it in," says my son. Right. 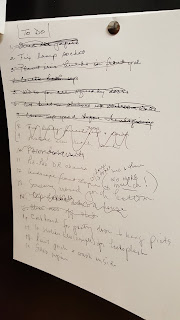 The thing is, the house is only one thing in need of repair after repair...not because I've ignored it, but because it's always something.  It's a rule of life that feeling settled and in control of a moment is only a warning sign to be on the look-out for What's Next. This year, particularly, What's Next has been in plentiful supply, those miles of tin cans rattling along like a hurricane (all right, not a hurricane...perhaps a small squall?).

I ought to be used to sudden changes, taking them in stride with experienced aplomb, but lately I feel growing in me a surge of disgruntlement sometimes hard to contain.  Like the house under its power-wash, my peeling nerves and leaking filters are showing me what repairs need to be done to my psyche...or at least to my sense of balance about what are, after all, pretty petty things, put in proper perspective. 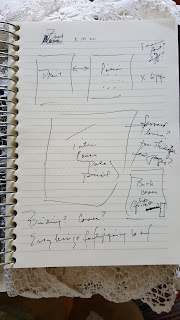 And at the same time there are so many good things swirling in the air...the new symphony schedule arriving in the mail, along with an invitation to a good friend's milestone birthday party, and my nephew's wedding a few months' hence. A trip to Greensboro with Cathy next week, and, if care comes through, to Asheville for a weekend to see Anne. There are cards to make for November's show, and all the events in between.  Kathy Steinsberger will be back from France in a month, and she promises we'll work on a new book I have in mind.  Maybe I'll even get back to the shore for a real vacation.

Which list do you think I'd rather work on?

Yes, ok, somewhere in there will be that trip to Lowe's for screening and a truckload of sand for under the house, etc.  Maybe on the way back from the dentist's.

As I noted earlier, this is what attempts at clean living will do to you:  longer lists, thicker defenses.  Back to the studio.
Posted by Rachel's House at 7:24:00 AM 2 comments: