A Place at the Table for Peace

Good morning.  For nearly a month (if you include pondering, pickling, and perambulating about it), I have been working on a new piece.  It's evolved slowly, as do most of the larger art I do, but the slowness gives me both leisure and pleasure to pursue (and accept and appreciate) the visions that create themselves.

Art isn't about explaining, so I won't.  I will give you a little tour, however.  The base is linen, cut and edged to be a table runner, on which five places are set, each with a place card centered on a mat.  Each place card is a book, with a collaged cover, a handmade paper title page, and a printed poem inside which the image inspires.

So that you can see at least some detail...cover, title page, poem...I've photographed each book.  I'd love to know, as always, what comes to your mind, too. 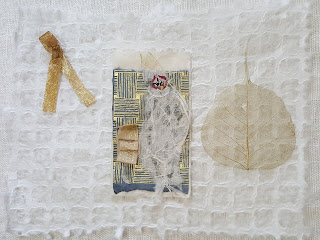 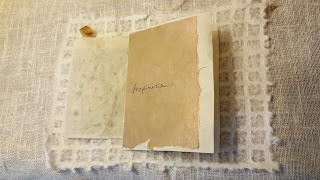 Watch for the moment
when wings open and soar
above prisons above
calumny and misdirection
(the winds howl, the winter's bite)
above the hiss
of fiery tongues who blister
what we hold from harm

Remember where we
come from
the pure spontaneous
AH!

Rise!
to the occasion
to compassion
to care 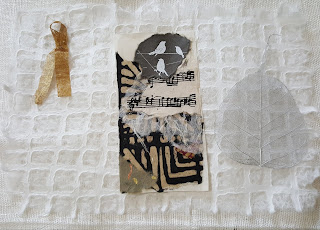 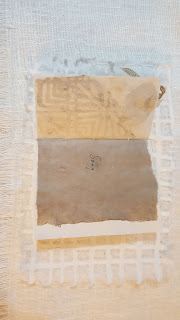 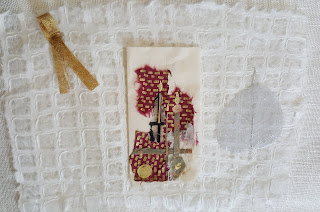 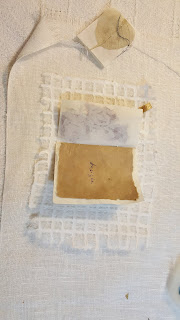 We draw awake in
the dawn each
soul brings

and see in its glass who
we are 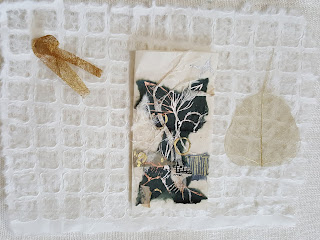 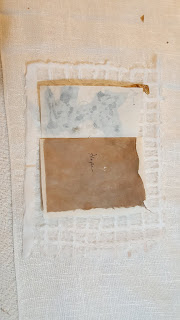 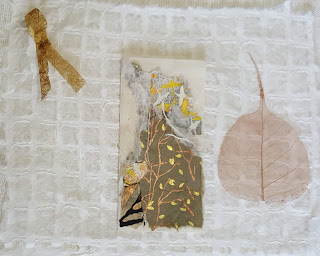 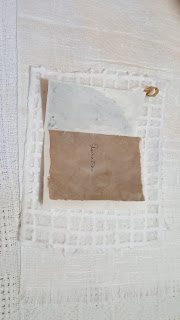 Is the earth
remembers our names
nurture
our return...listen
we grow again

Lunch on a pretty summer day

After an hour's relaxing on the porch, my uncle is having a light lunch here in the dining room...half an egg-and-spinach sandwich and a salad of strawberries on butter lettuce, cranberry juice and maybe a cookie afterwards.  It's one of those early afternoons when the sun is flickering equally lightly through the trees all around us, its buoyancy peaceful, hopeful.  Goodness knows we could use all of those spirits these days.  I've already told Julie, our caregiver, who has just come in, that today needs forthwith to be low-impact.


It's been quite busy this morning...the nurse coming at 10 while he was only half awake, breakfast punctuated with questions like "do you know where we are?" and "how are you feeling?" (hard to answer any time!); the physical therapist drove in right after that, a wonderful woman named Valerie who keeps him moving gently and firmly and with whom he has the most patience of all those who cross his path bothering him about something or other; then a caregiver who, though not new to his care, is unfamiliar.

This week, after a three-day stay in the hospital geriatrics clinic that severely tested his mental status (not to mention his tolerance, of which he has very little for such intervention, anyway) there have been more people in and out, night and day, than he can keep count of, much less put names and faces to.  Every one is concerned for his welfare, of course, but very old age is tired of concern...it simply wants to live out a routine, have a little company, take a shot at humor, fall asleep unimpeded in a chair or rocker, certainly not be bothered with what day it is.  I can sympathize.

Things will even out very soon, though, with more predictable, uncomplicated attention; it took me a day or two to iron out a feasible schedule of caregivers, but thanks to his previous illnesses, few as they have been, I've gathered a useful network to call on.

We're so lucky that we can give him that, that he can afford it.  We are not, as a country, set up to really care for people--the old, the young, the ill and distempered.  Always there is a sticky web of bureaucracy, a crude dismissal of the poor and soon-to-be-poor, to struggle through even for basic support.  Something as simple as the height of a bedside table, or as complicated as the prejudicial assumptions made to distinguish each medical necessity...all of them spell our irresponsibility for one another.  We don't, to put it bluntly, get it...even, amazingly, while we are living it ourselves.  And yet because of rules, regulations, and presumptions, and care facilities that seem to care more for themselves than for their inmates, conditions that can often be addressed simply and cleanly with a good dose of common sense, take on herculean proportions.  Unfortunately, common sense seems to be missing in huge doses.

Anyway, our newest chapter here at home is that, despite fortunate stability of care, each day now will be a different reality, evening out one way or another as the hours go by, certainly, but needing to be carefully negotiated each morning.  Unless one understands that continuously varying state of mind which is at work in the aged mind, it can be confusing, both for caregiver and cared-for.  We are grateful for the stability of environment that allows it plenty of room to wander safely, in place where, as the nurse today put it, there are plenty of clues to hook on to.

Lunch being finished now, it's well-deserved naptime for my uncle.  I'm off to the grocery to stock up on tomorrow's fare.  The young ones are coming to visit...quite a different energy in the house, and like the airy afternoon most welcome.

Independence day dawned brightly this morning, and with  the exception of a few clouds filtering through (maybe rain later today, we can always hope) brought heat and quiet to our street. 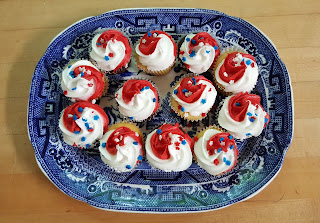 We wish there were someone here to celebrate with us today, but it's only my uncle and me.  Though he is healing spectacularly well (the nurse and physical therapist shake their heads, amazed at the speed), he's not quite up for my niece's pool picnic with the rest of the family, and most of the neighbors seem to be out somewhere.  Still, I woke this morning in a mood to cook.  It's a holiday, after all, and holidays mean food...I don't feel justified in letting this one pass unnoticed at the table.  Especially one so purely centered on picnic. 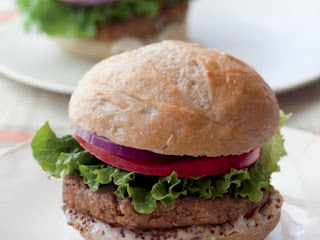 Until last year, for him and my aunt, and before that for other family, the summer holidays...Memorial Day, Fourth of July, and Labor Day...meant hamburgers and hot dogs foremost, one each, with trimmings like baked beans, corn, tomatoes and ice cream. This year he voted for a hamburger again, dropping the dog.   In case you are wondering, my uncle's recovery has made no dent in his appetite.   I'm not a meat-eater, but protein, everyone who knows insists, is what makes healing possible.  (Would that we could use so simple a remedy for the larger sphere on which we live.)  So he will have his burger.  Leading up to it, I've been working all morning at the half dozen or so dishes that spell the Fourth for us. 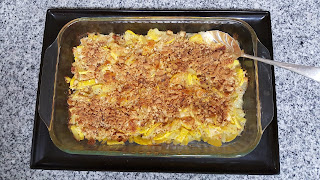 Beginning with Summer Squash Casserole, the ultimate Southern covered dish, which was inspired by a yellow monster our helper Julie brought in yesterday from her landlady's garden.  Clearly it had lain unnoticed under its wide leaves for a month before somebody thought to pick it.  "I figured you'd know what to do with this," she laughed.  And I did.  I borrowed a recipe from that belle of Southern cooking, Paula Deen, and set to work seeding and slicing it.  All morning the smell of baked onion and Parmesan cheese permeated the house.  We won't miss the sour cream I forgot to throw in. 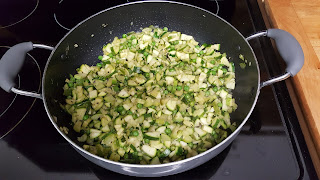 The next up was Zucchini Relish, which had been an experiment for our neighbor Steve's birthday drinks last weekend.  It was, I decided, good to have around any day.  Zucchini, the other summer squash, is on the table here all during the year...sauteed with a little onion, chopped raw in salad, folded into quiche, stuffed with herbed rice...but now the small, dark green ones are at their best.  This time I added to the relish some fresh peas, just for fun, a dose of lemon pepper, and some herbs.  Most of the work is dicing a lot of zucchini and a couple of shallots small enough, then watching carefully as they cook down over forty minutes or so.  Don't shudder!  The end result is worth the misgivings of sauteing such a delicate vegetable for so long...it caramelizes them to a rich sweetness, still shapely but spreadable.  With wheat or rice thins, it could be a whole meal on a hot day when you don't want anything else but to dip into something cool and slippery. 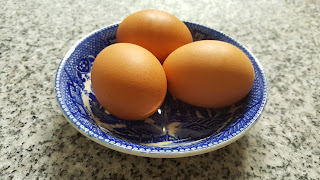 Hard-boiled eggs! Though I'm risking a whole tradition of picnic necessities by not deviling them, I'm just not in the mood today to fuss.  A little fresh parsley and lemon juice over the shelled halves is good enough.  My mother would tell you so, too. 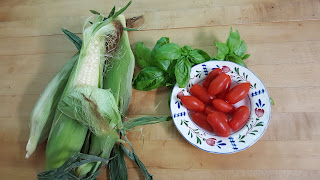 Corn on the cob.  Tomato with basil.  I thought about combining them into a cold salad, but they are so much better whole and on their own.  I can taste the plain, unadorned kernels already. I wish Alexander were here...it's become his favorite just in time for summer bounty. 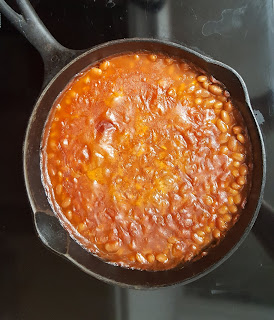 I was still deciding on whether today is too hot for baked beans, but those clouds sheltering our midday nudged me toward them.  I love baked beans.  They are good protein, too.  I got up from this blog post and baked some, with mustard and beer. 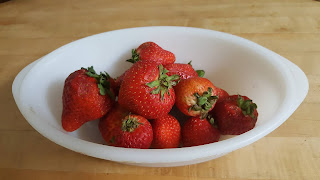 After that, a bowl of berries is just enough to sign off with.  We'll be set for the day, and probably a few days thereafter...don't be surprised if I call a few of you up to share leftovers.

On this Fourth, may you enjoy not only fine fare and fanfare,
but hold close the freedoms we celebrate today, even in fragile times like these.