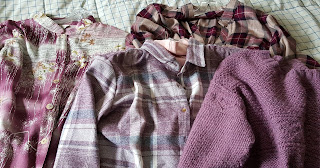 Lately I have found myself wearing that color a lot, from raincoats to underwear.  It isn't by design, at least not conscious design, but one day last week, in West Virginia for one of a triplet of family funerals, it seemed to me an odd coincidence that, with the exception of the black suit I would wear for the service, everything in my small travel bag (which was itself purple) was some shade of it.

I suppose you could consider it one of the bruise colors, as my friend Pam's daughter once called them...red, black, blue and gray (the new black)...the standards we shop for at a certain age; easy to coordinate a outfit without more than a grab in the closet, and safe as houses for fading skin and hair, only a bright scarf needed to pull everything together and hide one's scars.

Purple, though...I wonder.  That seems the bruisiest of all.  And today, seated before the front window, watching the brave north-facing daffodils finally rearing buds into bloom despite the day's chill, I am feeling as tired and achy as a bruise would suggest.  Sturdy as I like to think myself, these two and a half months have taken a lot out of me, I'm just realizing.  One takes each day as it appears on the horizon and goes forth to meet it, accepting what comes however one can.  Shoulders raised in defense, one does what needs to be done, and gets on with it. 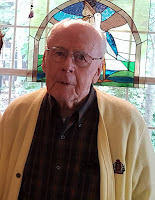 Now that life has changed again, I'm glad for my uncle, for whom the pain and frustration of dementia are now relieved by his passing.  Now that sympathetic company have drifted away, I feel at home once more, rattling around in my more-often-than-not silent rooms.  Now that my muscles have unclenched, I am slowly awakening to what's next.

Still, my eyes open too early in the morning, though there is no longer any reason to.  I retire early, emptied by the day, though with one thing or another on my mind I fall asleep later.  Last night it was after one o'clock, and only after I'd gotten up to make a cup of Echinacea tea.  Each morning I make my list to focus the day, and, amazingly, tick off each item...calls to make, affects to sort out, services and furniture to rearrange, appointments to show up for.  Everything else, I put on hold for when my fatigue rides away on the spring winds. 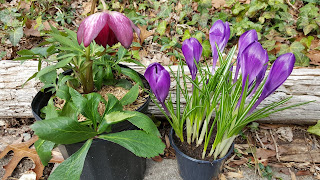 Ah, but there it is...the other side of purple...not the bruise but the promise.  Look here at my Valentine's gift from Joseph and Alexander, a pot of the first flowers up in the returning warmth, and the rich bloom on the hellebore, a gift from my neighbors Betsy and Vern. 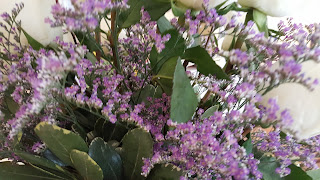 Even the pure white roses my aunt and cousins sent for our memorial gathering were cushioned in purple. 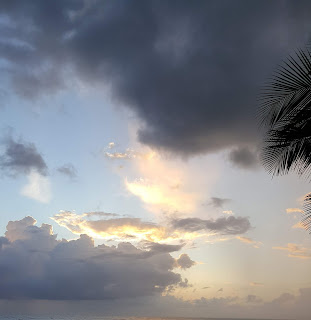 And here, the gray-purple of the first show of light.

The chill in the air may pretend to a flurry of snow tomorrow to spite yesterday's warmth, but it's a facetious swipe no one really believes in.  I don't.  Purple may be the transition between lives as well as seasons.  It's good to know.
Posted by Rachel's House at 8:40:00 AM 1 comment: