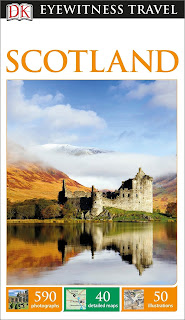 Welcome to another travel posting, after four weeks overseas, this time to Scotland, Wales, a few days in London, then on to Spain.  It’s been an interesting time (may you, too, live in interesting times, as the fellow says), and so I thought that I would this time write you straight from my journal, which I kept nearly every day, so that you can get an on-the-spot view of things.  Be warned that I do go on and on about a day.  Pictures, of course, will accompany prose; some days, perhaps to your relief, my pages might be all photographs.  Here is the beginning: Edinburgh.

I.
On the train, after a long sleepless night and an equally long morning sorting out train tickets, we ride out of Manchester Piccadilly on the crowded 12:35, to arrive in Edinburgh’s Victoria station by mid-afternoon.  It’s too bad, I think, that we can’t simply transport ourselves, instantly, from home across the ocean without the draining air travel…cramped, uncomfortable, dragged queue to queue along corridors that seem like science fiction props.  So different than train travel through a country, where the ride over the changing landscape becomes part of the journey. 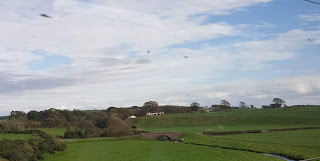 We are going north through Preston, Oxenholm (gateway to the Lake Disrict, of Wordsworth fame), Penrith, Carlisle, Lockerbee (I remember that with a shudder, and then Bharati Mukherjee's searing story, "The Management of Grief", based on that tragedy).  Towns are interspersed by sheep pastures, different than those in France but with the same low hedgerows and wide, hilly green pastures.

We share seats with a family from Beauly, in Northern Scotland, above Inverness—they have two trains and an hour’s car ride until home, albeit through beautiful country. 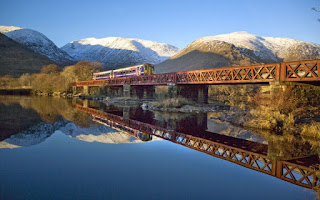 We spend the trip talking travel with them across the table.  They, the Williamses (father, mother, sister and brother) are returning from a vacation in Tenerife, on a school break, but upon divulging this, Isle [e-la] shrugs and admits that next year, after having holidays for a few years there, they might look farther afield.  They have never been to the US, so we think of places (besides Disneyland, their first thought) that would be good for a couple of young adolescents and their still youngish parents.  They are clearly fond of the outdoors, good travelers and interested in where we have been, too.  We find a plethora of destinations in this country…Philadelphia, the Grand Canyon, the Pacific Northwest, and New Orleans, for example…that wouldn’t disappoint them.  As always, in the civility of trains abroad, stories come out; even the children take part in the sharing, listening to possibilities and adding to family lore.  I give Isle my card and promise to host them if they decide North Carolina…sea to mountains…becomes their goal. 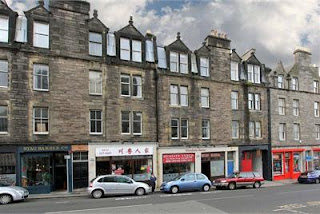 The AirBnB at 12 Lady Lawson St, up the hill and down another from the castle, is a great find in a fine neighborhood for walking Edinburgh.  There are always landmarks in sight, so finding one’s direction takes only a day (or two).  The apartment, on the first floor (which means second floor in Europe) of a well-tended 100 year old building, with its light-filled lounge, two bedrooms, small but well-equipped and kindly stocked kitchen, and narrow bath will do us just fine.  It does mean climbing two flights of ancient, worn stone stairs, partly without rail, so we will have to learn to take our time on it. The heating system is a puzzle, by turns cooling and roasting us with seemingly no rhyme or reason. 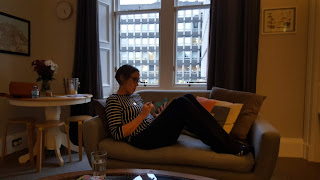 Looking around, I think to myself, why doesn’t someone actually live here?  The location swerves easily down the hill to the Grassmarket, and the small Sainsbury Local on the upper corner serves to pick up stock items for breakfast, carry out, and wine.  It isn’t the Sainsbury I first encountered in London, like France full of specialty things among the ordinary on each shelf…cheeses from the near country, smoked fishes of all sorts, dozens of each kind of vegetables and fruits…but this little one is fine for us travelers.

Then I catch sight of not one but two used bookstores up the street.  Aha.  Danger ahead.

Anyway, unpacking and settling in brings us to dinner hour, and as we are hungry we set out to explore our options, hunting at first for a good pub where each of our separate Britain experiences has taught us has the best and less expensive food, informally served and comfortable among strangers.  But to our surprise, we find much of the Grassmarket area catering to more college-kid and sports stuff...burgers, chips, endless pizza...til, retracing our steps, we come to Petit Paris, a genuine French restaurant we like the looks and the menu of. 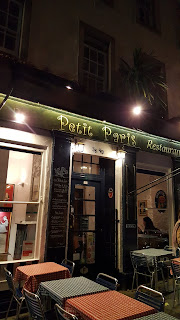 At the one small table left free, we are greeted by a man clearly in charge, and one youngish waiter, appropriately French.  Maitre d’ is the owner, who tells us that he is from the 6th in Paris—St. Germain was where he grew up; this small, almost invisible place among the sports pubs, absolutely redolent of a Paris bistro from kitchen to cuisine to service, bears him out. 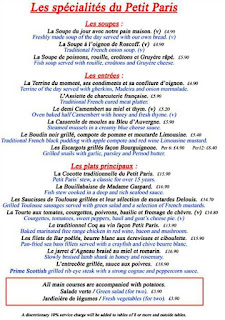 There are so many choices we would like to try, but finally I choose a sea bass on vegetables in a light marinade and Denise—I envy her that, too—lamb stew.  (Sorry:  no photos, as we are too hungry to think of taking any.)

We split a salad and a crème brulee, tempted by the dessert ordered by our tableside neighbors, a young couple from Ireland who have escaped from family for a weekend on their own.  We are so full we can hardly move even if we wanted to.  Frankly, I would go back there every day, if there weren’t a whole city to explore. 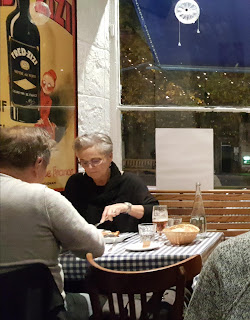 On the way back to the flat, we shop for goods for the flat, plan the next day’s walk and call Ada, in Glasgow, who has been expecting to hear from me and who gives out reams of suggestions for Edinburgh sites and restaurants.  We are sorry to hear about Clive’s extended hospital stay (worrying me about whether our stay there next week will interfere with his recovery), but Ada seems to look forward to the promised day of his return and to welcoming us. 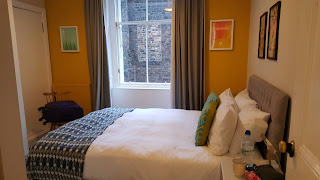 Bed is so comfortable under the soft, warm comforter that I read only a few pages of the Welsh story I brought with me before I sleep almost instantly. 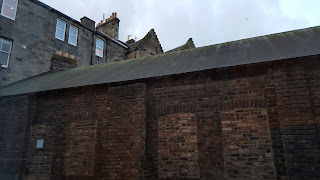 It’s morning as I finish this, looking out the bedroom window where an old brick wall, interesting more than reductive, faces me from across the lower roof of an equally old building.  A fine start to our trip.