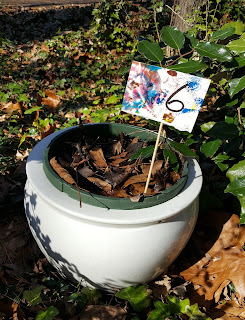 Today (the day I write this) is Alexander's birthday; he's six.  And I am here to tell you that there is a huge difference between being five (5) and being six (6).  He's taller in body, yes, but also in stature of mind and attitude.   Not something I would expect so practically overnight, though now that I think about it, I could see bits of it coming, a word here, a shrug there.  He doesn't like to be called cute or handsome or tootsie pie (well, I will give him that...); he is Alexander, plain and dignified. 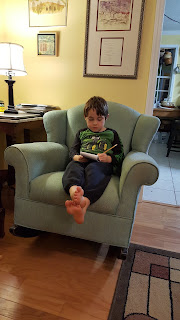 A curious, thinking boy, he is also at work on something all the time, as he always did--generating an idea a minute, building towers and machines and camps, wrapping yarn around chair legs for a trap, hiding under tables and in bushes so that he can spring out (and not a second too soon) Surprise!  Singing to himself, making up jokes and games (he has his own rules for backgammon, for example, quite complicated and changing every minute).  He still likes the making part of cooking and baking, moreso these days for someone specific...egg salad for his mom or dad, pumpkin chocolate chip muffins (without pumpkin, he insists) for his great-great uncle.  He likes learning his numbers and letters, but on paper his favorite are lists he can check off and measurements he can chart (and arguments about such which he can win); there is the theoretical and there is the practical, and there is no question about the one in which he finds his strength. 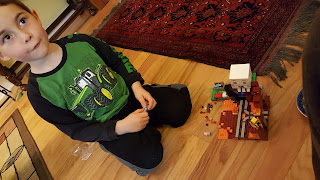 He loves that he is now in the six-year-olds clay class, not the beginners in which some are only four (4) years old, for heaven's sake, and proud of being in the Super Boys gymnastics group instead of the mixed group with only two boys and lots of little girls in specially selected gym outfits (with glitter, if you please), hopping and flipping around them and doing splits.  He still loves his bearded dragon, Beardie, but you can see him moving into a little different relationship to him now that he is older...more I-you then I-we.  With toys he is as excited as ever with things that run on batteries, race around the house or climb to the moon.  He has begun to hanker after the games his older cousins play.  "When I am seven," he ponders, "what day will it be?" 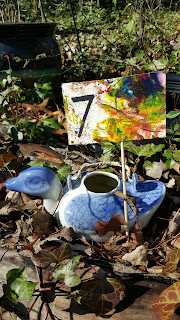 But there is the Alexander that stays the same, too...his affection, his humor, his energy--goodness! what energy!--and his need to be his own person and do his own things (that is, do things his own way). 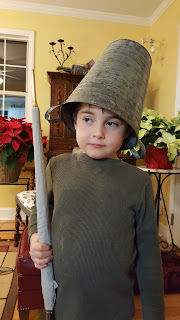 Mostly he is concerned that things should stay the same, even while he grows beyond it.  There he inherits the child's greatest wish:  to keep the world safely around him, while he takes his own good time wandering in it.

Interestingly, only a day later I turn 74, and some of those child's traits appear to belong to me, too, though in more questioning form.  You can forget the energy...that, I am afraid, has long dissipated.  But I watch Alexander's idea-a-minute, and have to smile.  "There is nothing you like better than a project," my husband used to say, not without a hint of exasperation.  And though I have long given up acrobatics, which I was pretty good at once upon a time, I like clay, too, the way it forms and reforms under your fingers, the way its smooth surface can turn into any shape you wish.  I am attracted far more to the used and discarded than I am to the new...there is so much more to invent with them.  So I am an artist, in that way, and so is my young grandson.  Alexander and I can turn anything into anything else in pretty much the same minute. 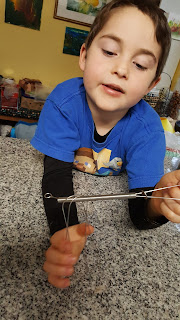 Like Alexander, I am a person who chases theory into the practical.  I am going to admit here, after all these years, that during my time teaching, I had little use for writing postulatory articles on minute subjects I didn't think the world especially needed to have to read or wasted paper on, despite the fact that it seemed to be the way to the heart of an academic career.

You are hearing this from a person who has used writing as her best form of communication all her life...a bookworm, a wordsmith, a close listener to the tales of others.  Papers at conferences?  Ok, but only to share a conversation with a group of people present and already interested, and then we would all go out to dinner and then go home and back to teaching and doing something about something.  Whatever the rules are, I too prefer to do things my own way.  (Some people might call that stubborn; Alexander and I just ignore them.)

There is another side to that trait:  a woman I once worked with (Colleen something I can't bring up now, though I remember her as if she were sitting right here smirking at me, imposing, acerbically funny, caring, and fun to be with) once said to me on greeting, "Ah, Rachel...still trying to save the world?"  It took me back for a minute, but then it set me forward, too.

And yet another:  the need for belonging, which in funny ways contradicts my great need for solitude, for having regular space around me to think and not think.  The pleasure in friends (and that includes family), both long-time and nearby, and in their correspondence or in sharing walks or spontaneous visits during which we can catch up with each other, in sharing holiday tables.  Alexander and I like cooking for people; we like finding their pleasure in being so served.  Likewise, my happiness in finding myself in a neighborhood as neighborly as ours comes from the same source.  Further than that is my tendency to be the gatherer of information about who is where and doing what...not unlike Alexander who knows where every single child in his class is on the playground at any moment. It can lead to one more trait fortunately now dropped from use: to find myself in charge of whatever organization I volunteer for.

So on these birthdays, I celebrate, gratefully, that Alexander and I are part of each other's everyday theoretical and practical working world. 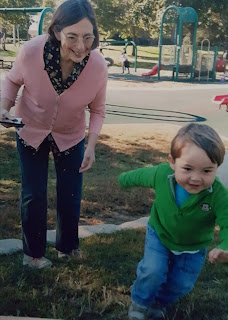 Happy Birthday, dear boy (if you will allow me the dear just this once), who, despite my climbing years, gives my life one more soupḉon of youth. 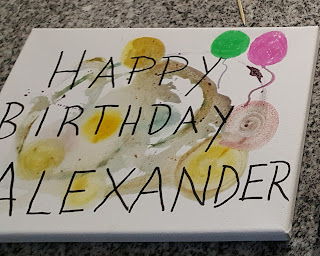