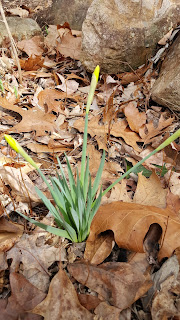 And just in time.  Winter has been a wild ride, three days of nearly freezing temperatures, and then 60 or 70 degrees with clouds, rain, or sun for a few more, the pattern repeated month by month.  Today is one of those reaching for high warmth, so it's a pleasure to shed one's coat by mid-morning.  It's also a pleasure to tread carefully over the ground looking for shoots of daffodils and the first returning herbs. 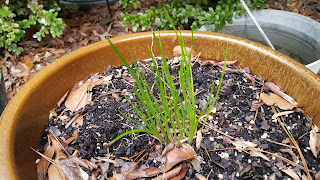 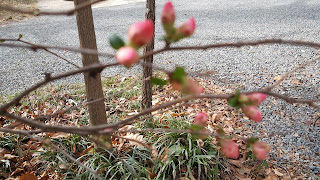 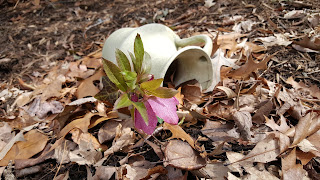 This morning before lunch, my uncle and I took a short walk around the neighborhood, eyeing enviously the blooms in the sunnier yards. 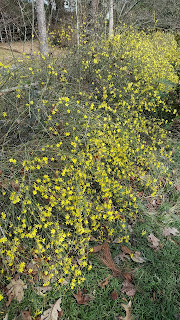 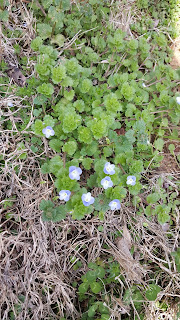 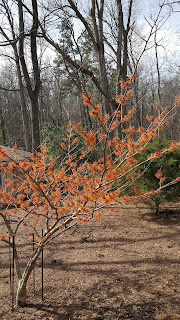 On such a warm day, it made each turn we took a discovery, good for the morale as well as the winter-stiff legs.   Although in a few days it threatens to be chillier again (we hope not enough to freeze these beauties' futures), we have this week to imagine what the promise of spring means in so many more ways.

For instance, behind my yard, they're renovating extensively the house and studio that faces the main street, these days tearing out everything from cabinets to insulation; I suspect soon the roof and floors will go, too.  That building frenzy also seems a sign of the season, the urge to fix up, revamp, make new, and grow. 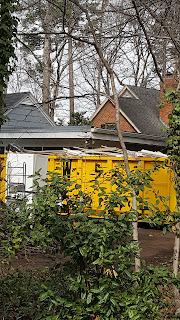 In this house where we've been just keeping ourselves afloat for so long, the fixit bug infected me last week, taking me sort of by surprise.  All year has been a renovation of sorts, but just now I'm looking more critically at the latent repairs that I have lived with too familiarly and too obliviously...the enamel wearing on the kitchen sink, the royal mess on my workroom floor, and the cardboard panel the heating and air installers left over a hole they had to cut out in the bedroom wall.   I am beginning to square my shoulders toward recovering some dignity in those and other neglected areas. 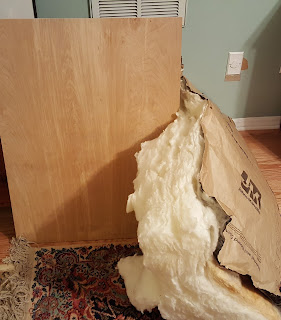 I am delighted to say that I've had some windfalls in a few of those tasks.  My nice neighbor Steve left me a plywood panel, perfectly cut, and some insulation I can use to replace the cardboard covering the furnace.  (He also left me a wheelbarrow full of the rich mulch he makes from his leaves, so I could entice my young dogwood and other skittishly growing plants to some vitality.)

And after looking at every plumbing supply place and site for a new kitchen sink, I came home one day and realized that I already had a perfectly useful one sitting behind the house, one I had harvested from the children's own kitchen renovation two years ago.  I've been using it as a potting and painting bin all this time, but the other day I shined my critical eye on it and decided that with a little elbow grease it would do just fine for the kitchen.  These intimations of spring have given me the energy to get it done. 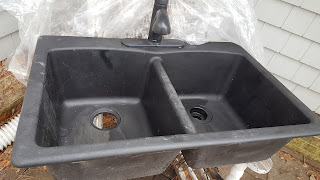 Those of you shuddering at the idea of using a potting sink in the kitchen will just have to trust me that it's a sturdy and well-fitting appliance which will serve the purpose more than adequately.  Like most found things, its repurpose takes a little imagination to overcome its shortcomings, but its advantages shine.

It also takes some changes of mind and vision.  When I thought about a new sink, my preferences were quite different...a deeper, wider, single-bowled ceramic tub with four holes for the faucet I already have and liked.  On the contrary, my backyard sink is double-bowled, heavy black, and single-fauceted.  It has the same depth as the one I am replacing.  In fact, it has the same shape, practically.  It erases all my preferences for a new one, but they pale in the face of the fact that one, it's free and two, installation is a cinch...pull out the old one, drop in the new. No need to replumb the drains or reroute the lines.  Expediency can be a rush.

Just now you are no doubt wondering, as I am: what is this shaggy story all about, a sink I didn't want turning into the one I'm eager to install?

Well, I'd have to begin by letting out that I am a gleaner at heart. Nothing makes me happier than to find an old, toss-off item that winks at me from a thrift store, curbside, or someone else's discard pile...take me home, it says, you'll see what I can still do!   In fact, knowing about my sink replacement efforts, a friend texted me excitedly that she'd found a perfectly good double ceramic Kohler sink for $50 in Habitat's ReStore.  Did I want it?  At the time, I was still holding out for the single bowl.  You can always dream.  So I turned it down.  Silly me.  You can also always make do.

You can understand now that perfection hasn't been working overtime in my vocabulary.  More often than not, my intentions, and my dreams, take a back seat to spontaneous improvisation. But often enough, both I and those findings are the richer for it.

I'm not a particularly thrifty person; you don't want to know what I spend on sturdy shoes or indulgences when I am traveling.  I do like the idea of recycling, so you can give me an environmental star for that.  But mostly, I love the adventure in the search and rescue of tossed-away subjects that still might find life in their own or a new career.  A leather clutch purse becomes a handmade book cover; a Turkish platter a birdbath; a broken piece of crockery sits happily in the garden disguised as the eye of a fish.  And don't get me started on kitchen gear, like my backyard-become-kitchen sink. 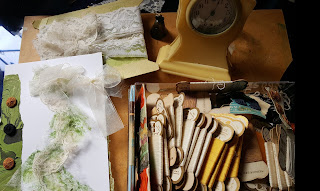 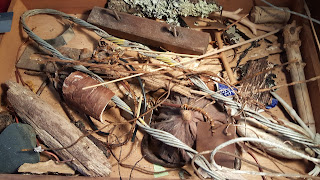 As many times as I am looking for things, things I'm not looking for find me.  Friends who know my proclivity for the worn and tired bring boxes of stuff to my door.  The two photos above beg the question, Is it art yet??  They sit on my worktable in the studio daring me to find them a place in a piece that has little to do with their origins.  Such creations evolve most of the time without plan, though with plenty of intention.  I begin with the materials at hand, look around for what might incorporate them, and then set to work, letting the piece show me what it can become. Along the way, I pick up other foundlings that seem deliberately put in my path, meant to be incorporated.  Here's one that came straight out of that box of street-things. 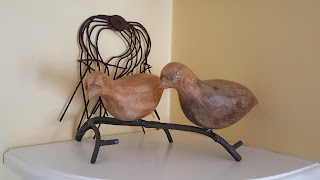 If I think about it, it seems that the way I live has also been mostly whatever comes my way and whatever works.  It doesn't always result in a perfect scenario (but then...).  Still, seeing potential in whatever shows up has its own rewards.

There is a lot to be learned in the humbled, the damaged, the thrown-aside, that can be worth quite a lot, both in their material makeup and in the state of our minds...open to other ways of thinking, to acceptance, to understanding of the way things work, especially beneath the surface. Or so I persuade myself to believe.

Anyway, here is Spring, come along to show us the potential that's been hiding underground all winter. 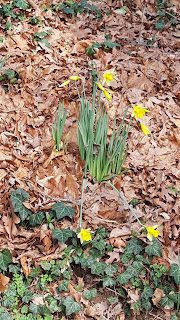 Have you felt your growth spurt yet?
Posted by Rachel's House at 6:35:00 PM No comments: 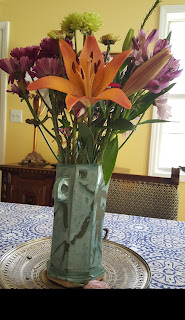 The other day Joseph came for breakfast and brought these flowers, just what we needed to remedy a patch of the winter blues.

We've had the flu, and being inside has not improved our mood, even on nice days like today, chilly in the morning but sunny and warmer by afternoon...so warm that the sun coming around the porch windows is nearly hot.  Even though I'm finally past the infection, my uncle is still dealing with its nether effects, his age making it more difficult to summon the energy to recover, and opening him up to all sorts of weird complications.  It's tiresome to be sick and to be slow shaking it off.  We think we are sturdier than such illnesses, that it's impossible for anything that ugly to happen to us that we can't beat.  It leaves us feeling vulnerable, and seeming as if the world outside our windows is a different life than our inside cooped-up world, with no bridge between.

Except these flowers, in wonderful shades of purple, violet, scarlet and orange, which come in the door to remind us that after winter is spring, and with it the early blossoms we so look forward to in February...winter jasmine, quince, early bulbs, forsythia.  Across the street, Cathy and Steve have planted a tree with bright orange tips; though small, its potential for cheering up the winter landscape is obvious.

A gift of flowers, whether the hothouse kind or the braver inhabitants of our yards, is the most welcome just now.  They are as important to making our days healthier as were the many neighborly gifts of soups, fresh juice, and citrus (and just today a plush neck and body warmer, from my sister Ann, to ease end-of-the-day aches).  Not only the gifts themselves, but also the many kind acts of giving warm us.  Like Joseph's flowers, they are the symbol of regeneration we so crave.