Pathways to the spirit 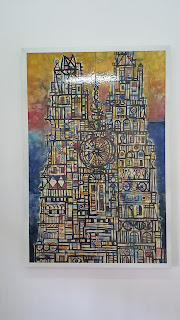 Religion in Cuba is, as I soon found out, a matter of Art...the art of the spirit in its origins, the art of power in its long history, and the art of Arts, amazingly preserved despite the evolution of political upheaval over its five centuries.

From that first morning when I sat solo in the cafe Porton, watching the flower lady across the street slowly bring her offerings...I think they were gladioli...to the front steps of the old Iglesia de la Merced, I began to incorporate the arts of religion into my study of what art means to Cuba, Havana in particular. 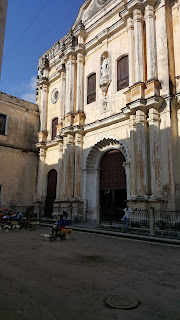 As I watched, the waitress asked me if I were on my way to the church?  It's beautiful, she smiled.  Though I had walked past its long south side on my way, I hadn't taken much notice of it.  It's not a noticeable building on the outside; it turns its shoulder away from Calle Merced, though its introit is a wide plaza where ladies spread themselves out to sell their flowers and beads.  I decided to go inside.

Up the steps, the heavy main doors almost do not invite entry, but I followed a man through a smaller portal, and found myself at the back of memory, slipping into a side rear seat.  There was a mass beginning, though one by two people were still coming up the aisles to attend it.  Workers, mostly, by the gear they carried and the uniforms they wore, it was clear that whatever attitudes they normally put on for the street metamorphosed into a single figure of solemnity when they crossed the church's nave (narthex, I think, is the right word, but don't ask me how I know that, and I'm not going to bother looking it up)...head slightly bowed, shoulders forward, eyelids at half mast, they found a seat near a friend, or in a conveniently empty row as near the front as possible without being intrusive.  They were a smallish crowd...perhaps only forty or fifty in a space meant to hold twenty times more.  The priest, standing down by the front row, made himself part of them. 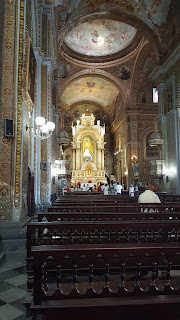 From my seat beside the last pillar, I could view the whole scene to the altar, and, looking left and right, the row of small altars on either side, each nearly as elaborate as the main, and each more interestingly telling its own story of the saint it embodied.  If you grew up in a Catholic church of that order, or have traveled in Europe where the medieval and renaissance churches follow that elaborate plan, you are accustomed to the tour of eyes upward and outward to painted treasures of art, and a tour director inevitably saying a version of, You see how they gave the best of their art to the divine being.

If outside the famous European churches gargoyles, emperors,and edifices like bulwarks pronounced their formidable power, inside was the gilded and marbled spirit meant to inspire inward.  There were no such power figures outside, but inside the Merced was a faint rustle of kneelers and soft whispers of prayer and response, and the cool of the morning, in a wide open, bright space that was yet tomb-like.  I took two surreptitious photos and left, quietly, promising myself I would return at a less ceremonial hour to walk around and take more.  What I saw only slightly had intrigued me...here, too, the art of the narrative in those side altars was so Cuban, so beyond religion, or at least the Eurocentric religion of the usual church. 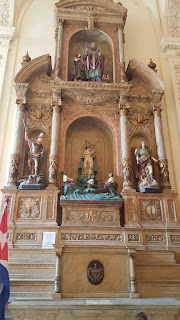 What I later found, on a second, afternoon visit, confirmed my first impression.  There was indeed a deeper layer of the Cuban in these stories,beginning with the apparent fusion of Christianity and the pantheistic worship and beliefs of the African rites into the Santeria, that rooted Cubans more firmly in a spiritual world that reinvented their arts. 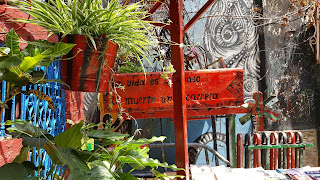 I had on my agenda to see the small Santeria museum, Callejon de Hamel, at the edge of Central Havana, and did, but it was less instructive, frankly, than walking the streets.  The signs of Santeria were all around, on splashes of color and symbol on walls, in white-costumed devotees going about ordinary business in the streets, in small shops where figures, beads, potions and herbs were a brisk commerce.  More publicly, they appeared in the arts in the galleries, in dances for tourists in the plazas, or in grinning poses for tourist photos with cigar in wizened mouth, but it was in the churches that the two held court in a quietly understood union. 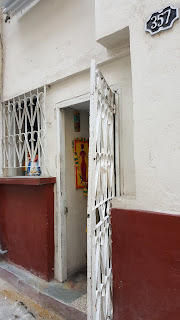 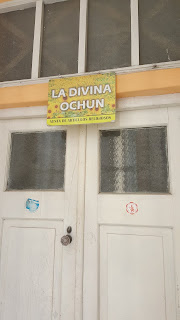 It is the dead who inspire the memorial of prayer, ritual, costume, and custom. The Santeria saints are alive and well in the Cuban household and street life.  They are called on for every yearning, plea, emergency.  Altars inspire daily attention. 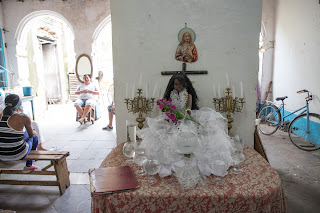 It is the same in the Necropolis Cristobal Colon, as elaborately sculptured as the famed Parisian cimetieres, where I walk and walk, fascinated by the arts to the dead...the dedications, the family histories, the carefully designed tombs, trying to imagine the stories behind them.  There is a chapel at the center, too, and though its art is also a careful dedication to the saints, it is nothing to the art outside. 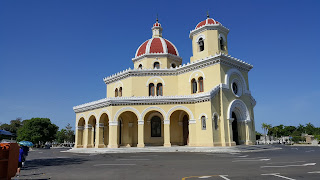 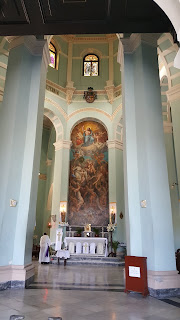 Beyond the historic forts, statues of revolutionaries, cannon leavings and museums to the art of war, these are the places of peace, though the stories they memorialized were often tragic.  In one, memorializing a woman who has lost children,  I watch three women...obviously a grandmother, a granddaugher and her mother...come with tears to plea before a memorial which custom associated with fertility, hope, and children's recoveries. The grandmother and granddaughter hang back as the mother goes forth bearing flowers to make her supplication.  In another, one of the largest and most complex, there are stories of the battalion of firefighters who died entering a flaming building whose owner refused to acknowledge that he had stored illegal munitions there.  I could have taken photos all day there, but here are a few: 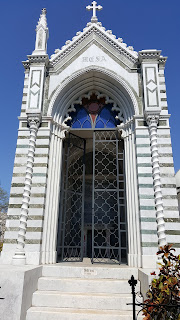 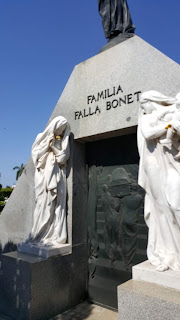 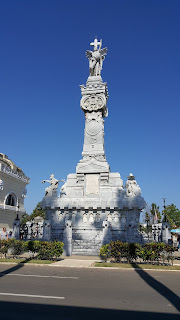 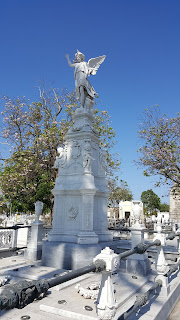 It is the same everywhere.  We make art as the highest form of memory, of honor, of testimony.  Here are other places of memorial, all beautiful each in their own way, to their own philosophy:

There is so much more to say about Cuba and its arts.  Perhaps some day I will return to say it.