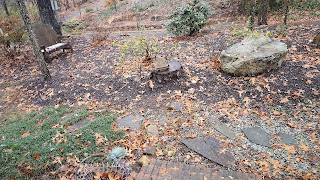 A cold drizzle has fallen since daybreak...perhaps even longer through the night.  Yesterday there was a rasher of snow; the dusting is melted now, giving up its ghost despite the "winter storm warning" sternly appended to the local weather report for today.

But it's a good time for writing out the holiday cards I've painted, collaged, and sewn; even watching the unchanging scene outside the windows reminds me that inside it's warm and wafting the beginnings of the more glowing holidays.

While the outside of the cards have been a pleasure to do, the inside, the verse I usually include, has come harder.  Not only the weather, I suspect, but the despairing news from across the world, and the feelings of helplessness in the face of so much deliberate and hateful ignorance, have kept me from seeing how even as peaceful a scene as I painted would translate into words that inspired hope. 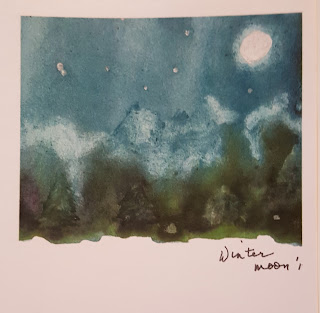 But late this morning, sitting down with firm intention (and spurred by my uncle's pacing to get them into the mailbox), I took the printed image and wrote from its cue.  Only a segment of the poem that ensued will appear on the cards, but somehow I didn't want the whole to be tossed aside.  In some lights the latter stanzas may seem redundant (not to mention not quite a holiday message of cheer, except for the dogged traditionalists of Chanukah), but seen in another light, they're at least what I mean.

Well, you all see what you think.

In the shadows, peace winters
while its roots ingest the cinders
of the earth’s strength.

We wait, longing, to be willed
its fortune…how can it, we ask, chilled
and hungry, leave us stranded so long?

In its bed, hope and knowing
listen for signs of our own growing,
believing that good will light us again.

This raw season, as the cold looms,
the darkness of all but one bright moon
waxing and waning over the landscape

we once called home... can it nourish
us, too, bereft as we are, unlock our courage
and carry us forth to break its insidious spell?

P.S. Now that I've written this, outside the window it is indeed beginning to snow again, thicker than yesterday, though so far disappearing on impact over the roof, street, and mulched leaves.  It's cold, but not cold enough, I guess, to keep the beauty of a winter storm, just its illusions.  (I'm in a mood, aren't I.)

My sister, on the other side of the state, sent photos of her snow-draped landscape this morning, no doubt to show us that somewhere, beyond the dull wetness, loveliness reigns. 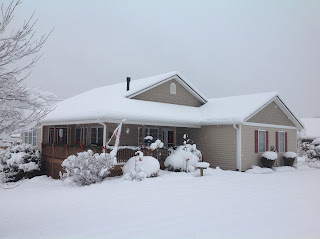